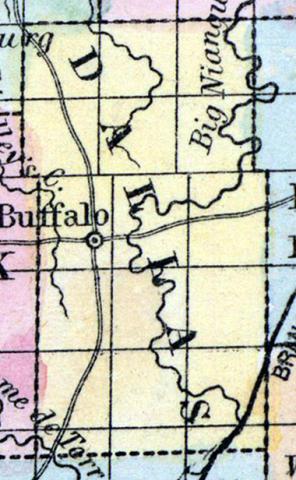 BUFFALO, a post-village of Dallas county, Missouri, a few miles W. from Niangua river. Its origin is very recent.  (Baldwin & Thomas, A New and Complete Gazetteer of the United States ... 1854)

BUFFALO   The county seat of Dallas county, is a thriving little town, situated in Benton township, on or near Big Niangua Creek, 210 miles from St. Louis and 95 from Jefferson City. This town was first settled by Messrs. Stanley & Williams eighteen years ago, the post office being established about the same time. A weekly paper has just been established here called the Buffalo Union, edited by E. D. Plummer, and issued on Wednesdays. Buffalo contains one seminary, one Masonic lodge, Buffalo, No. 147,) and one Methodist Episcopal Church. The chief productions are corn, wheat, oats and grasses. Timber, oak, ash, maple, white and black walnut. Minerals, lead and iron. Improved land is worth from $6 to $8 per acre, and unimproved from $2 to $3. There are several good mill sites on the different creeks in the neighborhood.  The Southwest Branch of the Pacific Rail road is being constructed and will soon reach Buffalo. The town is situated on the eastern edge of a beautiful prairie, dotted with mounds, groves of timber, farms and farm houses. Population 250.   (Missouri State Gazetteer..., 1860)