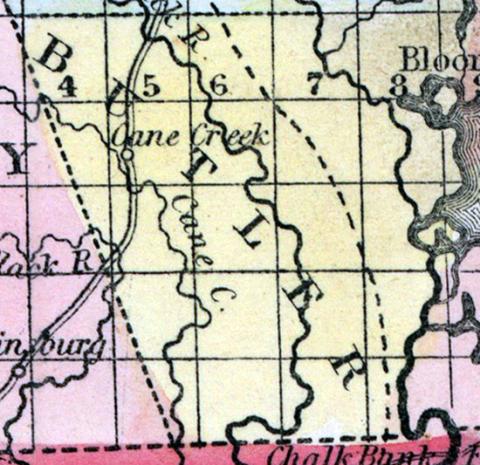 BUTLER COUNTY.   This county is situated in the southeast portion of the State, bounded on the east by Stoddard and Dunklin, west by Ripley and Carter, north by Wayne, and south by the Arkansas State line. This county was organized February 27,1849, and when the census of 1850 was taken, contained but 1616 population, and only 143 farms were at that time occupied. The largest crop produced from the 5000 acres then under cultivation was Indian corn, of which 55,800 bushels were returned. Although a portion of this county is the best of meadow land, but seven tons of hay were produced in 1850. It now, 1860, contains 2148 inhabitants.
This county embraces about 350,000 acres of land, of which 100,000 are free from inundation and very fertile—250,000 having been returned as swamp lands, but can be principally reclaimed by drains and levees.
By an act of Legislature, session of 1852-53, these lands were granted to the county for the purpose of their reclamation, with provision for the appropriation of a portion of their proceeds to the advancement of education. These 250,000 acres, at an average value of $2 50, will bring $625,000, which would enable this county to contribute liberally toward the construction of the railroads projected through that region, and also to provide for the education of present and future generations on a liberal scale. Unsold school lands in the county, 12,000 acres.
The south half of Butler County is frequently overflowed, which, until drained, renders it unfit for permanent improvement, unless it be for cranberry culture, in which, if properly managed, any farmer could realize a handsome fortune, provided the climate is suitable, which has by some been a matter of doubt. The cranberry is a hardy plant, and the fruit is always in demand at a fair price, and the cheap and otherwise worthless lands in the southeast corner of the State are said to be the proper soil for them, and it would cost but a trifle to test the matter, which, if successful, would prove a great source of profit to hundreds of individuals, and add very materially to the revenue of the State.
It may be proper here to correct an erroneous impression in regard to the location of Chalk Bluffs, generally spoken of as in this State. They are on the bank of the St. Francois, in Greene County, Arkansas, on the extreme northeast boundary of Crowley's Ridge, and very near the State line. The name is derived from the pure white appearance of the potter's clay, of which the banks are composed; which, however, in some strata are beautifully variegated with flesh tints, and others cream colored. Professor Owen, State Geologist of Arkansas, says he has manufactured small crucibles from this clay, and that it produces an excellent and strong article, and will resist sudden changes of temperature without breaking.
Of timber, the growth of the high ground is principally black and white oak; in the bottoms a mixed growth. Groves of cypress timber flourish in the bottoms of the St. Francois, a short distance above Chalk Bluffs.
A little south of the State line, one mile south of "the Pine," and between the Gainesville and the Pocahontas Roads, about township 21 north, range 8 east, near the bottom of a hollow where a spring branch takes its rise, on the north side of the ridge, and about four miles from Levi Boyd's farm, is a large bed of yellow ochre, which has been used successfully by the inhabitants to color woolen goods, and is said to have a better body and clearer color than French spruce yellow for brick work, and outside work on buildings.
Mr. F. R. Brunot, a heavy iron manufacturer in Pittsburg, has purchased large tracts of iron and timber land in the northeast corner of this county, at Indian Ford, on the St. Francois River, for the purpose of establishing extensive iron works, when the completion of the railroads now in course of construction shall afford him an outlet. This bank of ore is on the last bluff before entering the swamp region going east.
POPLAR BLUFFS, the county-seat, is located on section 3, township 24, range 6 east, and contains about 200 population, with a fair number and variety of business houses. Miller's steam flouring and saw-mill does an extensive business, and is the most important manufactory in this section. A new court-house, costing $10,000, is being erected. This town has about 200 inhabitants, is situated upon the last high lands on the west side of Black River, and obtained its name from the fact that a large cabin, built of poplar poles and covered with poplar bark, occupied this site for more than thirty years, and had become a general rendezvous and store-house for the large numbers of hunters who annually visit the bottom lands adjacent. It is located at the head of navigation on Big Black River, and considerable lumber is shipped from this point. An $80,000 contract has been let for improving the navigation of the river, and a boat built at Pittsburg to run in the trade, which, besides the usual machinery, has an extra engine and apparatus for removing snags and other obstructions.
A large colony of Danes are settling near Poplar Bluffs, upon two townships of land in a body, and upwards of one hundred families are expected to arrive this season. The immigration into the county is very great, and the next census will show a very favorable condition, both as respects the population and products of the county.
At no distant day the Iron Mountain Railroad must be carried through to Memphis; and as it will then be the great north and south thoroughfare, Poplar Bluffs will become a place of considerable commercial importance.  (Parker's Missouri as it is in 1867..., 1867)