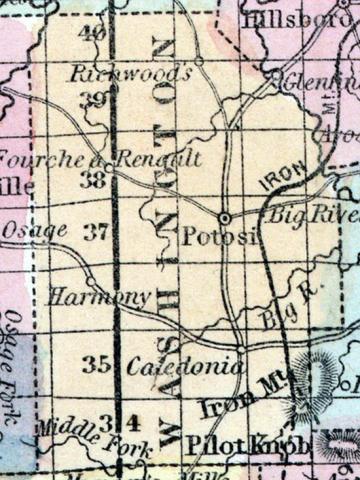 CALEDONIA, A post town of Washington county, Belleview township, situated in the midst of a beautiful valley, embraced as it were in the arms of the Ozark mountains, between Big river and Cedar creek.  The Iron Mountain Railroad runs within a distance of seven miles.  The town is 12 miles south of Potosi, the county seat; 80 miles from St. Louis and 124 miles from Jefferson City.  It was first settled by Messrs. Reid and McCoy, and the post office has been established thirty-nine years.  It contains one Masonic Lodge, viz: Tyro, No. 12, one Presbyterian and one Methodist church, five general stores, one express agency, one steam and three water flouring mills, one harness maker, one tanner, one good hotel, one nursery, three carpenters, two blacksmiths, one attorney, three wagon makers, one boot and shoemaker, one cooper, two physicians, one sash, door, and blind factory, two saw mills, and one tailor. The soil is rich and well adapted to the growth of wheat, corn, oats, barley and potatoes.  Fine streams of water traverse the valley, some of them affording ample power for the largest manufactories, numerous springs gush out from under the hills, affording abundance of clear fine water, more or less impregnated with iron, giving it a medicinal quality, highly promotive of health.  The timber consist chiefly of oak, hickory, elm, ash, and black walnut.  The minerals, lead, copper and iron in abundance.  Uncultivated lands may be bought for $10 per acre, and cultivated about $15 on an average.  A good school is much needed here; mechanics can also fine enough to do, such as cabinet makers, brick makers and potters.  Population 300.  (The Missouri State Gazetteer and Business Directory, 1860)