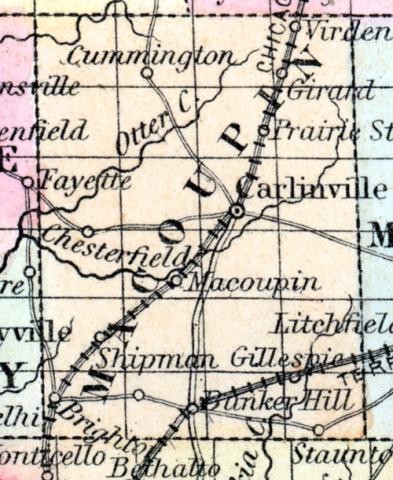 CARLINVILLE.   The county seat of Macoupin county, is beautifully located on the Chi., Altod & St Louis railroad. As a shipping point, it is not excelled by any inland town in the state. Vast amounts of produce are annually shipped from this point, its location being in the centre of one of the finest wheat, corn and oats growing counties in our young and fertile state. It was laid out in the spring of 1829, and moved slowly along until the spring of 1851, when a new impetus was given it by the construction of the above named road. From indolent inactivity everything assumed a different aspect. Bustle and life took the place of inactivity. Improvements sprang up as if by magic. The population in 1851 amounted to about 500 persons. It now numbers about 2,300 souls, and is still making rapid strides in the way of improvements.
Carlinville was thus named in honor of Mr. Carlin, afterward governor of the state, who was one of the persons appointed to survey the town. Twenty years ago, and the spot where Carlinville now stands was the domain of the red man, the country in which it is located bearing the name of "Black Hawk hunting ground." On the shores of the little creek near which the town is situated, their lodges rose in myriads, their dusky inmates thronged the forests, their council-fires crackled, and the old chiefs gathered round in silence, smoking their pipes, and musing on the daring deeds of their fathers, or forming plans of vengeance on some offending foe. They now live only in the memory of those who have followed where the star of civilization pointed the way, and where the soil, teeming with life and richness, invited them to share its blessings. Thus has the hand of the white man made subservient to his uses all the natural resources of a country whose yielding are sent to supply almost a world with the means of existence.  (Hawes' Illinois State Gazetteer...,1859)