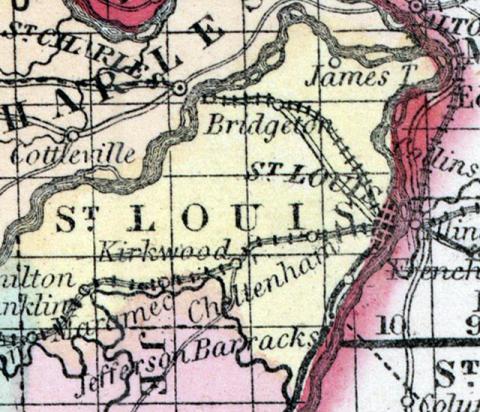 CARONDELET   An important town of St. Louis county, situated on the Mississippi river and on the line of the Iron Mountain Railroad, 6 miles from St. Louis. This town was first settled by the French about fifty years ago, and derives its name from one of its early settlers, Baron DeCarondelet. Up to the last few years, Carondelet has been peopled almost entirely by French and Germans, and very little progression had been made either in improvements or increase of population. Latterly, however, the town seems to have taken a fresh start, a great many Americans have settled there, who, together with the more enterprising portion of its older inhabitants, are endeavoring to make up for lost time. The change is very manifest. Large blocks of business houses are being erected on the main street, manufacturing establishments are already in operation, and others in course of building. There is, perhaps, no city in Missouri which has better facilities for general manufacturing than Carondelet. She has a good harbor, rock and water in abundance and easy access both to St. Louis and the iron and lead mines 80 miles below. Unite these advantages with capital and enterprise, and you have all that is needed in building up a good manufacturing town. The city contains four churches, viz., Methodist, Presbyterian, Catholic, and Lutheran. The Academy of St. Joseph is an imposing building, erected on a beautiful table land which rises boldly from the banks of the river. It is conducted by the Sisters of St. Joseph and is in very successful operation. There is also another Catholic institution of learning, and a Protestant select school. The Odd Fellows have a lodge here, (Carondelet No. 114.) A weekly paper is published by A. W. McDonald, and edited by Jas. M. Loughborough, called the Carondelet New Era. Other institutions are about being established, viz., a bank, a city library and a lyceum. The chief productions are corn, potatoes and vegetables. Its timber, oak, hickory and walnut. Improved land is worth from $100 to $150. and unimproved from $50 to $100. Every inducement is made in selling land for manufacturing purposes. The town is well supplied with the usual mercantile houses, and the inhabitants are making strenuous endeavors to build up a town of importance and permanency. Population 3,000.  Mayor, Bernard Poeping. Constable, Batholomew Guion, Jr.   (Missouri State Gazetteer..., 1860)