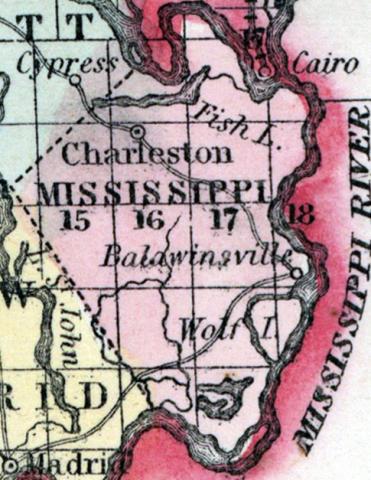 CHARLESTON   The county seat of Mississippi county, on the line of the Cairo and Fulton railroad, and contains one weekly newspaper, (the Charleston Courier, published by W. F. Martin, and edited by George Whitcomb,) two churches, viz., Methodist and Baptist, one Masonic Lodge, Constantine, No. 129, and a lodge of I. O. O. F., Charleston, No. 84, five stores, and two hotels. Population 350.  (Missouri State Gazetteer..., 1860)

CHARLESTON, the county-seat, was incorporated February 21, 1857, and is situated on Matthew's Prairie, and surrounded by extensive tracts of fertile land under a good state of cultivation. The principal county buildings are of brick, and the M. E. Church is said to be the finest in the State, south of St. Louis, Rev. T. W. Mitchell, Pastor. The Baptists have also a very neat church, W. K. Young, Pastor. Charleston contains 2 hotels, a printing-office, branch of the Union Bank, large and commodious school-house, six merchants and grocers, drug store, stove and hardware store, livery stable, 2 blacksmiths, 2 wagon-makers, 1 painter, 1 tinner, 2 shoemakers, 3 saddlers, 8 carpenters, 2 shoe shops, 1 tailor, 8 lawyers, and 1 physicians. The Free Masons, Odd Fellows, and Good Templars have each an organization here, and a fine hall. The Courier, edited by Geo. Whitcomb, is one of the best county papers in Southeast Missouri, from which we have gathered considerable information respecting this fertile county.
There is a weeping willow growing in the yard of Mr. James Moore, of Charleston, that measures over twelve feet in circumference, three feet from the ground. Its branches extend longitudinally a distance of thirty-five to forty-five feet from the trunk, in every direction, making a most grateful shade, and giving a commanding and beautiful appearance. This tree is the product of a riding switch placed in the ground twenty-five years ago, by a person who plucked the twig at Cape Girardeau.  (Parker's Missouri as it is in 1867..., 1867)