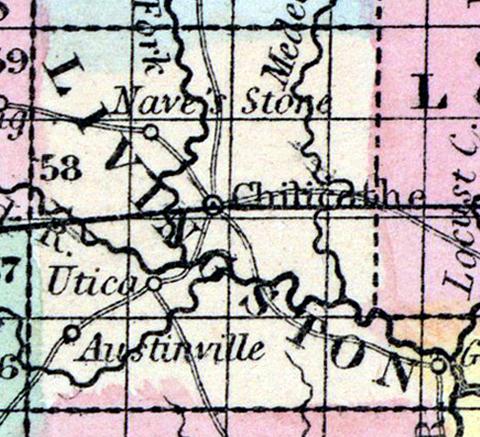 CHILLICOTHE   The county seat of Livingston county, and one of the most important towns on the line of the Hannibal and St. Joseph Railroad, 129 miles west of Hannibal, 76 west of St. Joseph, 228 from St. Louis, and 353 by railroad from Jefferson City. This town was first settled in the year 1837, by John Graves, and received a very great impetus on the advent of the Hannibal and St. Joseph railroad—it is surrounded by a rich prairie country, and rich farming lands. The town is well supplied with manufacturing facilities, and a steady and healthy growth anticipated. It contains five churches, viz., Methodist, Cumberland Presbyterian, Baptist, C. S. Presbyterian and Episcopal; a Baptist College and a Female Seminary, both of which are in successful operation. One Odd Fellows | lodge, viz., Chillicothe, No.91, and Friendship lodge, No. 89, with Lone Star Chapter, No. 30, belonging to the Free Masons. A weekly newspaper “Chillicothe Chronicle,” edited by A. S. Hughes, two steam saw, and one steam flouring mill, two hotels, two tobacco manufactories, and about twenty-five stores of various kinds.  The chief productions are cord, wheat and oats - its timber, oak, walnut and hickory.  Population 3000.  County Sheriff, F. Liday.  (Missouri State Gazetteer..., 1860)