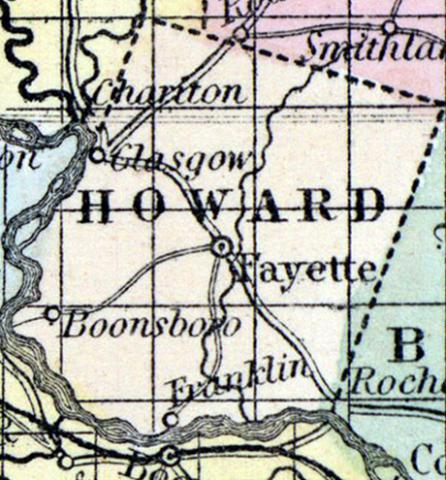 GLASGOW, a flourishing post-village of Howard county, Missouri, on the left (N.) bank of the Missouri river, 72 miles by land N. W. from Jefferson City. It is a place of considerable trade ; the surplus produce of Howard county, and some others, being mostly shipped here. A plank-road is projected between Glasgow and Huntsville. Two newspapers are published. Population in 1853, about 1200. (Baldwin & Thomas, A New and Complete Gazetteer of the United States ... 1854)

GLASGOW, A post village of Howard county, Chariton township, on the Missouri river, 12 miles from Fayette, the county seat, 175 miles from St. Louis, and 60 from Jefferson City.  It was first settled in 1836, and post office established the following year.  There are five stage routes as follows, viz., daily to Allen on the North Missouri Railroad, distance 32 miles, semi-weekly to Marshall, Saline County, 40 miles, tri-weekly to Booneville, 22 miles, daily to Jefferson City, 60 miles, and daily to Brunswick, 30 miles.  It contains three churches, viz., Presbyterian, Christian, and Methodist,(South,) one weekly newspaper with a large circulation, viz., Glasgow Times, edited and published by Clark H. Green, and issued on Thursdays. Two seminaries, (male and female) both in a flourishing condition.  Two banks, branches of the Exchange Bank of St. Louis, and the North Western Bank, the former with a capital of $250,000, and the latter with a capital of $200,000.  Eleven stores of various kinds, six manufactories and two hotels, viz., Glasgow House and Star Hotel.  It has one of the most extensive manufactories in the State, owned by B.W. Lewis & Brother, three steam flouring mills, and one steam saw mill.  Population 1000.  (The Missouri State Gazetteer and Business Directory, 1860)