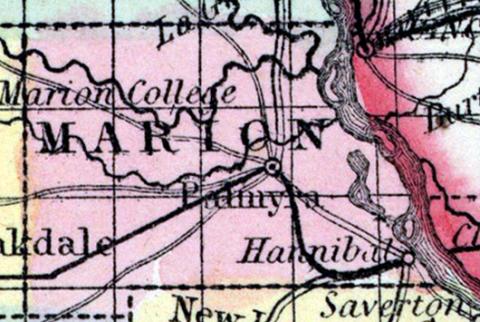 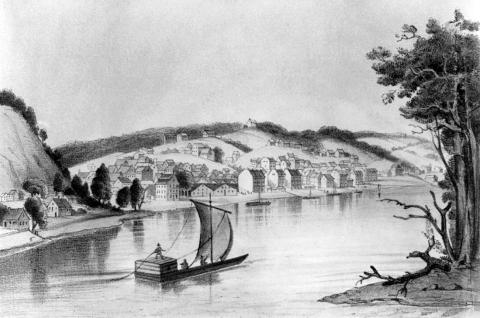 HANNIBAL, a flourishing town of Marion county, Missouri, on the Mississippi river, 158 miles above St. Louis, and 15 miles below Quincy, in Illinois. It is advantageously situated for commerce, and is rapidly increasing in population and business. Large quantities of hemp, tobacco, pork, &c., which are raised in the vicinity, are shipped at this point. The adjacent country is very productive, and rather populous. Coal and carboniferous limestone, an excellent material for building, are abundant here. A railroad has been commenced, which will extend from Hannibal to St. Joseph, on the Missouri, above 200 miles in length. The town has 2 newspaper offices. The pop. in 1840 was about 600; in 1850 it amounted to 2557; in 1853, to 3500. (Baldwin & Thomas, A New and Complete Gazetteer of the United States ... 1854)

HANNIBAL. An important city, and the commercial emporium of north-east Missouri, situated on the west bank of the Mississippi river, about 150 miles above St. Louis.  It was first laid out in 1819; the town was incorporated in 1839.  The city has grown rapidly within the last five years, and especially since the completion of the Hannibal and St. Joseph Railroad. The style of the buildings in Hannibal is good, and more than two-thirds are brick.  The frame homes are comparatively small, while many of the brick edifices would be of credit to cities of much larger pretensions.  Among the buildings of a public character is Brittingham's Hall.  It is of brick, with iron front on the ground floor, two stories high, (second floor thirty feet in the clear), and covers a space of ground 68 x 142 feet, on the corner of Market and Fourth streets. The "Hannibal City Institute" is a spacious three story brick building, situated on Market Street near Maple Avenue. As a location for health and beauty, there is no better upon the river.  Being upon the west bank, all the miasma of the river is carried away by the west wind, which prevails nine-tenths of the time.  As a business location, there is no point above St. Louis enjoying so advantageous a position, in any point of view.  Blessed with an energetic, intelligent, and able population, and combining all the essential elements necessary to constitute greatness, it would be indeed strange if she did not press forward to the elevated position to which nature has designed and fitted her.  There is every indication, too, that she will not falter or weary in the race.  The rapidly increasing railroad facilities, with Nature's great highway, the Mississippi, constitute a rapid means of transportation for all kinds of products to all parts of the country, and whilst the surrounding country is rapidly filling up with an industrious population, it demands and must be supplied with such articles as the manufacturers and mechanics of Hannibal produce, and many other which the natural facilities of the place would enable them to produce cheaply and well. Within the last five years its population has doubled, and it now reaches the very respectable number of eight thousand. In manufactures Hannibal has two large tobacco factories, three flouring mills, two planing mills, two saw mills, two foundries and machine shops, one extensive rope manufactory, one match manufactory, soap and candle manufactory, soda factory, two carriage and wagon factories, two cigar establishments, three tin, copper, and sheet iron manufactories, two very extensive pork packing establishments and gas light and coke company, together with manufactories of furniture, boots and shoes, marble, railroad cars and agricultural implements.  It contains ten churches, viz.;  First Presbyterian (O.S.), First Presbyterian (N.S.), Methodist Episcopal, Methodist Episcopal (South), First Baptist, Second Presbyterian (O.S.), Christian, Trinity Church (Episcopal), Church of the Immaculate Conception (Catholic). and Congregational Church. There are three railroads terminating here, viz.: Hannibal and St. Joseph Railroad, 206 miles in length, Pile County Railroad having its western terminus opposite Hannibal, and connecting at Naples with the Great Western Railroad of Illinois, and the Hannibal and Peoria Railroad now in course of construction.  (The Missouri State Gazetteer and Business Directory, 1860)