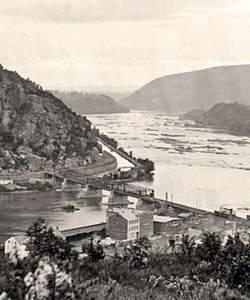 This spot, so celebrated for its wild and majestic scenery, is in Jefferson co., at the confluence of Shenandoah and Potomac Rivers, where, after the union of their waters, they find a passage through the rocky barrier of the Blue Ridge, 1200 feet in height. Mr. Jefferson, in his "Notes on Virginia," has given a full and graphic account of the scene which is here presented, which he characterizes as "one of the most stupendous in nature." "Jefferson's Rock," the spot where it is said Mr. Jefferson wrote his description, is a pile of huge, detached rocks, leaning over the precipitous cliffs of the Shenandoah, and looking into the mountain gorge of the Potomac. Its top is 12 feet square, and almost level; whilst its base does not exceed 5 feet in width, resting upon a larger mass of rock, jutting out from the hill. Mr. Jefferson pronounces the scenery at this place as "worth a trip across the ocean to behold."

There is also a most enchanting prospect obtained from the summit of a mountain opposite, about a mile and a half farther up, on the Maryland side of the river. The eye here reaches a very wide extent of country, fields, woodlands, and plantations; while the Shenandoah, as it is traceable upon the magic picture, appears like a series of beautiful lakes.

A bridge, 750 feet long, crosses the Potomac at Harper's Ferry. The U. S. have located an armory and an arsenal at this place, which are well worthy the attention of the tourist. Nearly 9000 stand of arms are annually manufactured here, employing about 240 hands. The hotels at this place afford excellent accommodations for visitors.

The Baltimore and Ohio Railroad here finds a passage through the Blue Ridge, in its route between Baltimore and Cumberland. The distance from Baltimore is 82 miles, and from Cumberland 96 miles. The Winchester Railroad also connects this point with Winchester, Va., 32 miles distant.