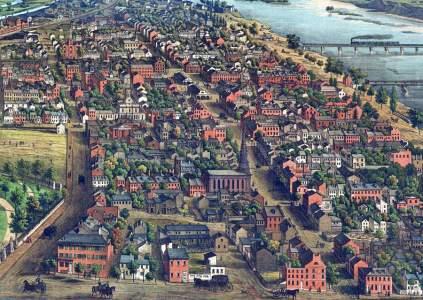 Harrisburg, capital of the state of Pennsylvania, and seat of justice for Dauphin co., is situated on the E. bank of the Susquehanna River, about 100 miles N. W. by W. from Philadelphia.  Population in 1800, 1472; in 1810, 2287; in 1820, 2990; in 1830, 4311 ; in 1840, 6020; in 1850, 8000.  The town is built on a peninsula formed by the Susquehanna on the W. side, and Paxton Creek on the E.  The northern part of the site is a gently-swelling hill, while the southern gradually sinks to a level plain, extending towards the junction of the creek with the river.  It is regularly laid out, with several streets running parallel to the river, and others crossing them at right angles.  The situation commands a fine view of the river and of the surrounding country.  The Pennsylvania Canal passes along the vale of the Paxton Creek, E. of the town.

The Susquehanna is here divided into two channels by an island called Foster Island; and a fine bridge, nearly a mile in length, including the crossing of the island, connects Harrisburg, from the foot of Market Street, with Cumberland co., on the opposite side of the river.  This bridge was finished in 1817, at a cost of $192,000.  Another bridge over the Susquehanna, built in 1837 for the Cumberland Valley Railroad, but having also a way for ordinary travel, enters the town two squares below.  This is an immense structure, nearly 4000 feet in length, having 23 spans, averaging 173 feet, and two arched viaducts, one 53 and the other 84 feet wide.  The railroad track passes upon the top of the bridge, and a double carriage way is beneath.  The cost of this bridge was but a little short of $100,000. This railroad connects Harrisburg with Chambersburg, 56 miles, W. by S., and there unites with the Franklin Railroad, extending to Hagerstown, in Maryland.  Harrisburg is also connected by lines of railroad communication with Philadelphia on the E., and with Pittsburg on the W.  It is brought into connection with a large portion of the interior of the state, as well as of the adjoining states, and of the west, by the great Pennsylvania Canal, with its various branches.

The State House at Harrisburg is a building of imposing appearance, having the advantage of a fine situation in the most elevated part of the town, facing towards the river, to which the ground gradually descends.  The edifice consists of a main building, and two wings which were intended to be connected with the centre by walls, and are so placed that their porticoes are all in a range upon the front.  The main building is 180 feet front by 80 feet deep, and two stories high.  The chambers of the legislature are in the lower story, and the upper is appropriated to the Governor's room, and two rooms for the state library, which contains about 10,000 volumes. The wings are appropriated to the public offices.

The front of the main building is decorated with a circular portico of six Ionic columns, 4 feet in diameter and 36 feet high.  The edifice is surmounted by a beautiful dome, the top of which is 108 feet from the ground.  From the cupola is presented one of the finest prospects in the state.

The other public edifices are the Court House, formerly occupied as a State House; the Masonic Hall, which is a large and handsome building; two Banks; the new Penitentiary, which is one of the most substantial and elegant buildings in the state, built in the style of a Norman castle; the Lancasterian School House, a large two-story brick edifice, erected by the state; and several handsome church edifices. Of religious denominations in Harrisburg there are the Lutheran, Presbyterian, Episcopalian, German Reformed, Methodist, Baptist, Unitarian, and Roman Catholic.