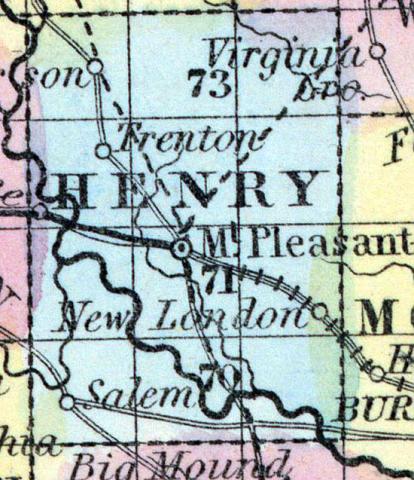 HENRY, a county in the S. E. part of Iowa, has an area of about 430 square miles. It [is] intersected by the Skunk river, an affluent of the Mississippi, and also drained by Cedar creek. The surface is generally undulating, the soil highly productive and easily cultivated. The greater part of the county consists of prairies, among which tracts of woodland are interspersed. Wheat, Indian corn, oats, potatoes, and grass flourish. In 1850, Henry county produced 642,910 bushels of Indian corn; 81,675 of wheat; 135,894 of oats; 27,165 pounds of wool, and 132,560 of butter. Limestone underlies a part of the county, and stone coal is thought to be abundant. The county is intersected by a plank-road from Burlington to Fairfield, and by the projected railway route from Keokuk to Dubuque. Named in honor of General James D. Henry, of Illinois. Capital, Mount Pleasant. Population, 8707.  (Baldwin's New and Complete Gazetteer of the United States..., 1854)

HENRY COUNTY.  Mount Pleasant, the county-seat, was laid out in the year 1836, by Presley Saunders; at that time the lands on which it was located were not in market, nor had it ever been surveyed, but the beauty of the location, taken in connection with the great abundance of superior building-stone, and the large body of timber that lay contiguous to the site, to say nothing of the never-failing springs of water that gush from the shores of the branch that runs through the suburbs of the town, induced the proprietor to believe that a town might be built up that would be a credit to the State. Nor in this has he been disappointed. This town now contains a population of about 1500 inhabitants, and is at present in a more prosperous condition, and is improving faster than at any former period.
The population of the county in February last, was 11,180. Beside the county-seat, there are other towns in the county of considerable size and importance. Saleui, in the south-west part of the county, is a thriving young place, containing 650 souls. New London, on the eastern edge of the county has some 400 inhabitants. Trenton, in the northern portion, some 300; beside these are Winfield, Lowell, Hillsborough, Kome, East Grove P. O., Marshall P. O., Wayne P. O., &c.
There are six church edifices in Mount Pleasant; Congregational, Presbyterian, Methodist, Christian, 0. S. Baptist, and Missionary Baptist. Other towns and villages are proportionally well supplied with churches, all of which are well attended, and in a healthy condition. In point of morality and sobriety, the community of Mount Pleasant are unsurpassed in the State. Henry County supports two newspapers : The Iowa Observer, Whig, and the Iowa True Democrat, Free- Soil — both published at the county-seat.  (Iowa As It Is in 1855; A Gazetteer for Citizens..., 1855)

HENRY COUNTY  Was organized by an act of the Territorial Legislature, then Wisconsin, at its session, held at Belmont, Wisconsin, during the winter of 1836 and '37. The same act that organized the county, located the county seat at the (then) village of Mt. Pleasant. This county is situated in the southeastern part of the State. Its southern boundary is but 15 miles from the Missouri line; and its eastern, the same distance from the Mississippi and Illinois. It is bounded on the north by Washington and Louisa counties, on the east by Louisa and DesMoines, on the south by Lee, and on the west by Van Buren and Jefferson. ... It is 18 miles in width, east and west, and 24 in length; hence it contains 12 government townships, which are organized separately into civil townships under the following names, to-wit: Baltimore, Canaan, Centre, Jackson, Jefferson, Marion, New London, Salem, Scott, Tippecanoe, Trenton and Wayne.
Skunk River, or Chicague, as the Indians called it (meaning pole cat,) is a stream of pure water, averaging about 100 yards in width. It enters the county, a little south of the north-west corner; and running in a south-easterly direction, leaves it a little west of the south-east corner, and its course passes through six townships, to-wit: Jefferson, Trenton, Tippecanoe, Centre, Jackson and Baltimore. This stream affords the most ample water-power, sufficient to drive all the necessary machinery that may be demanded by the surrounding country for all time to come. Suitable mill sites, occur on it at frequent points, four of which have already been improved, and have extensive saw and grist mills in successful operation, while others are in course of erection, The Skunk, with its tributaries, Big Creek, coming in from the north-east; and the Big and Little Cedars, entering it from the south-west, with many other smaller streams, renders Henry one of the best watered counties in southern Iowa. ... The government census of 1850 gives this county 8,707 inhabitants, 12 of whom were colored. In 1860, the same authority fixes its population at 18,760. The Burlington and Missouri River Railroad, passes through the centre of the county, east and west. The Keokuk, Mt. Pleasant and Missouri River Railroad is to pass through its centre north and south. This road will be one of vast importance when completed. A large amount of work, grading, etc., has been done on this road between Mt. Pleasant and Keokuk; but during the rebellion, but little was done upon it. ... The first post office was established at Mt. Pleasant, and A. Saunders, (now Gov. of Nebraska Territory,) was appointed post master. The following are the post offices of the county at this time, to-wit: Mount Pleasant, Salem, New London, Trenton, Marshall, Lowell, Rome, Winfield, Wayne, Vego, Cotton Grove, East Grove and Oakland Mills. (Hair's Iowa State Gazetteer..., 1865)