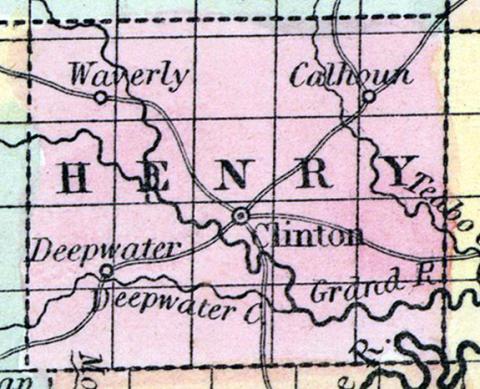 HENRY COUNTY.  This county, formerly called Rives, is situated in the western part of the State, bounded on the north by Johnson, east by Benton, south by St. Clair, and west by Bates and Cass, which separates it from the Kausas line. The first settlements in this section were made in 1831. The name was changed from Rives to Henry in 1841. The population of the county in 1850 was 4052; 1856, 6642; and in 1860, 9865.
Physical Features.—The face of the country is undulating; neither level nor broken. There is about one-third timber and the remainder prairie. The timber consists of oak, hickory, walnut, linn, etc. The early settlers hesitated about settling upon the larger prairies, on account of the lack of timber for fuel; but there have since been found extensive banks of excellent coal, and all objections are removed. So in many parts of this State, it will be seen that where a superficial examination indicates the absence of some important native element of wealth, deep research and thorough investigation generally prove the existence of hidden treasures which more than compensate for the seeming deficiency. The county is watered by Grand River and Big Creek, Deepwater in the western and Thibault (pronounced Tebo) and its sixteen tributaries in the eastern part of the county. Nearly all of these streams have very fine mill sites upon them.
Soil and Productions.—The soil is very fertile, and well adapted to all farming purposes. Some farms have yielded of hemp, 800 pounds to the acre; tobacco, 1600; flax, 2000 pounds, (in the straw;) corn, 80 bushels; wheat, 35 bushels; rye, 40; barley, 30; oats, 50; buckwheat, 50; potatoes, 250; onions, 320; beets, 320; carrots, 320; turnips, 500; timothy, 8000 pounds; clover, 2000 pounds; Hungarian grass, 8000 pounds, etc.; with an abundance of all kinds of fruit. Unimproved lands are worth from $2.50 to $8; and improved, from $5 to $25. This county is very well adapted to stock growing, as timothy, blue-grass, clover, and native prairie grass grow finely. Here are good openings for farmers, mechanics, and capitalists. Stone coal and iron ore are the only minerals of any practical value in the county.
Churches and Schools.—There are 17 churches in the county. Of schools, there are 55 district schools and 2 private. The High School at Clinton, and Male and Female Academy at Calhoun; the latter was incorporated in 1855. Both these schools are well conducted and liberally patronized.
The Osage Valley and Southern Kansas Valley Railroad, now in course of construction, will pass directly through the county-seat, and secure to the citizens of the county an outlet to market which they have long needed.
CLINTON, the county-seat, is situated on Grand River, which flows through the county from the northwest to the southeast corner. It contains one Methodist Church, a newspaper, (the Clinton Journal,) one Masonic Lodge, brickyard, steam flouring-mill, two hotels, High School, several stores, mechanics' shops, etc. Population about 300.
Calhoun is on Thibault Creek, twelve miles from Clinton, contains a Male and Female Seminary, Masonic and Good Templars' Lodges, one church, carding machine, two hotels, several stores and shops, and about 350 inhabitants.
Shawnee Mound is on Henry Creek, twelve miles from the county seat, and first settled in 1850, by A. D. Gillespie and others. Here are four churches: Presbyterian, Methodist, Baptist, and Christian. Population 50. This is in the center of a rich farming district.
Of other towns, there are Bellemont, population 100; Leesville, 100; and Germantown, 30.   (Parker's Missouri as it is in 1867..., 1867)