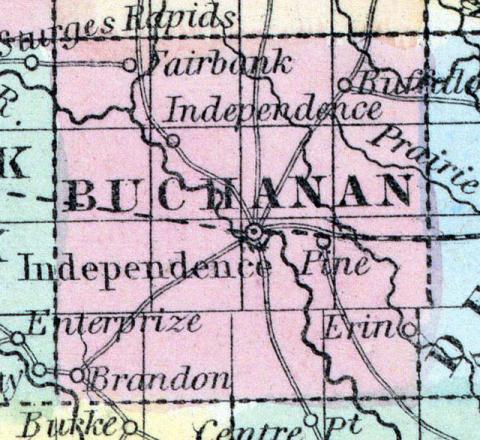 INDEPENDENCE, a post-village, capital of Buchanan county. Iowa, on the Wapsipinicon, about 75 miles N. N. W. from Iowa City. Its origin is very recent.  (Baldwin's New and Complete Gazetteer of the United States..., 1854)

INDEPENDENCE, the seat of justice for Buchanan County, is a thriving town, with a population of about 1,800 inhabitants. It is pleasantly situated principally on the east bank of the Wapsipinicon, and on the line of the DuBuque and Sioux City Railroad, sixty-nine miles west from DuBuque. The town site slopes gradually back from the river, giving it a very inviting appearance. Near the summit of the ridge, a substantial brick Court House has been erected.
The Wapsipinicon affords an excellent water-power at this point, which is only partially improved, and the adjacent forests furnish a good supply of timber for the manufacture of all kinds of agricultural implements, furniture, etc.
Along the banks of the streams, any quantity of stone for foundation and other building purposes can be obtained.
The surrounding country is excellent for agricultural pursuits, the rich prairie yielding large quantities of corn, wheat, oats, hay and other produce, while the river and creek bottoms and timber lands afford an excellent range for stock.
Independence was located during the winter of 1846, by Rufus B. Clark, and now contains ten general stores, nine groceries, two clothing establishments, three boot and shoe, three drug, two book and two hardware stores, two printing establishments, one bank, one foundry and machine shop, one brewery, one lumber yard, one livery stable, two hotels, two flouring mills, together with wagon, blacksmith, carpenter and other mechanical shops.
The Baptist, Catholic, Methodist, Presbyterian and Protestant Episcopal Churches each Have organizations here.   (Hair's Iowa State Gazetteer..., 1865)