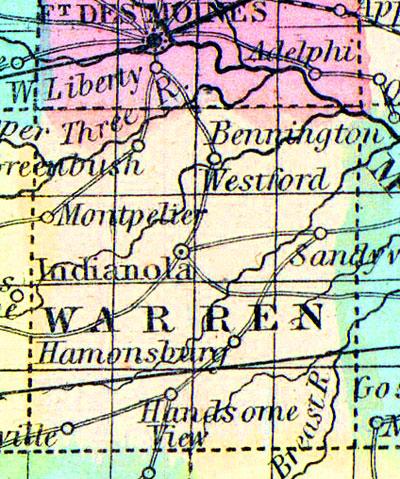 INDIANOLA, a post-village, capital of Warren county, Iowa, 135 miles W. by S. from Iowa City. The county has a fertile soil, and contains extensive beds of stone coal.  (Baldwin's New and Complete Gazetteer of the United States..., 1854)

INDIANOLA, the county seat,[Warren County, IA] is an incorporated city, situated in the centre of the county, on the stage line from Oskaloosa to Council Bluffs, and from DesMoines to Princeton, Mo. It is sixty miles from Oskaloosa, and seventeen from DesMoines. It is located on prairie, about half a mile from timber. Zebulon Hackett, Amos Booker and T. P. Henderson were the first settlers.
The Indianola Male and Female Seminary, under the direction of the Methodist denomination, is located here, and has about one hundred pupils. The town has two churches, Methodist and Presbyterian; also Warren Lodge, No. 53, A. F. & A.M., Indianola Lodge, No. 72, I. O. O. F., and a lodge of Good Templars. The County Agricultural Society has a fair ground, containing twenty acres, within half a mile of the town.
The business of the town may be enumerated as follows: One steam flouring mill, running three burr of stone, one bank, seven general stores, three drug stores, four groceries, two stove and tin stores, one bookstore and one newspaper, published by H. Money.  Population, 1,200. (Hair's Iowa State Gazetteer..., 1865)