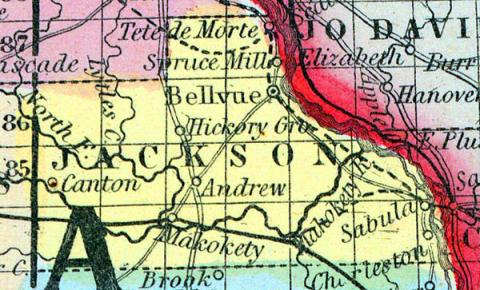 JACKSON, a county in the E. part of Iowa, bordering on Illinois, has an area of 636 square miles. The Mississippi river washes its north-eastern border; the county is traversed by the Maquoketa river, and drained also by the Fall river, and by several creeks. The surface is uneven, the soil is fertile, well watered and well timbered. Indian corn, wheat,  potatoes, and grass are the staples. In 1850, Jackson county produced 202,791 bushels of Indian corn; 132,024 of wheat; 25,854 of potatoes, the greatest quantity raised in any county of the state except Dubuque county; 101,512 pounds of wool, and 7594 tons of hay. The county contains valuable mines of iron, and lead. Maquoketa river furnishes water-power. Capital, Bellevue. Population, 7210.   (Baldwin's New and Complete Gazetteer of the United States..., 1854)

JACKSON COUNTY   Comprises in area fourteen full and six fractional townships of land. The principal towns in the county are Andrew, Bellevue, Wickliffe, Fulton, Maquoketa, Bridgeport, and some seventeen P. O. settlements beside.
The character of the soil is rich and fertile, and the ranging heights and diversified scenery on the banks of its numerous water-courses present an abundance of beautiful building-sites.
A railroad is in contemplation, and partly graded from Galena to a point directly opposite Bellevue, but it is uncertain when it will be completed.
Flouring and saw-mills are in active and profitable operation in different parts of the county, but it is impossible to obtain from their proprietors even an approximate estimate of their profits.
At Bellevue, are excellent openings and good sites for two more steam saw-mills and a planing-mill. Lumber for building finds very ready sale as fast as manufactured, and lumber for sawing is easily obtained. A small iron foundry, an extensive wagon-making establishment, and a cooper's establishment, would all do well in Jackson.
Jackson is one of the best watered counties in the State, and is well supplied with timber, principally white oak, black walnut, ash, hickory, elm, maple, white walnut, and bass-wood. Water-power unsurpassed for manufacturing purposes : upon several of the streams are already erected flouring and saw-mills, and others are in progress of erection. The county is also one of the best for agricultural purposes,in the State, and second to none for stock raising.
The soil in the valleys is a first rate black sandy loam (several feet in depth), and yields heavy crops of corn ; the ridges are generally second and third rate soil, with a subsoil of clay, or in some instances ferruginous sand, and produce fine crops of wheat. Potatoes and other root crops, as well as vegetables and vines, all flourish luxuriantly. The rocks of the county are what belong to the "Upper Magnesian Limestone" formation; are well adapted for building purposes, and make a superior quality of lime.
Iron ore is found in various parts of the county, lying loosely on the surface, and no doubt, from present indications, it exists in large masses. "Galena" (lead ore) is also frequently picked up in different parts of the county, and some mines have been successfully worked in the northwest part of the county — there is a rich "lode'' of "Galena" only three miles above Bellevue, dipping into the river, which can be seen at any time at a low stage of water in the Mississippi. It is the opinion of old miners, that when the mineral resources of this county are properly developed, it will prove rich in both lead and iron ores, as indications of its existence manifest themselves in almost every hill and ravine.
Bellevue, the seat of justice of Jackson county, is situated on the Mississippi river, twelve miles due south of the city of Galena ; the town site is upon an elevated plateau of land about fifteen feet above high water mark; it is surrounded by an amphitheatre of hills, mostly covered with timber, which break off the severe cold winds of winter, and prevent the temperature from falling as low by several degrees, as a few miles distant upon the ridges. This town was first settled in 1836, by J. D. Bell. In that year this site was selected (by authorised Commissioners, one of whom was the late Captain John Atcheson) for the Capitol of the then Territory of Wisconsin ; and but for some difficulty between the proprietors of the land and said Commissioners, this would have then been made the Capitol of Wisconsin Territory, which at that time included both sides of the river. This spot had always been a favorite one with the Indians, and its beautiful location caused said Commissioners to select it as a commanding situation for the Capitol.
The population of our town is about 1000. The population of the county is fully 15,000, and emigrants daily arriving.
There are five organized churches in the town, viz., Congregationalist, Episcopalian, Methodist, Baptist, and Catholic — one of each.   (Iowa As It Is in 1855; A Gazetteer for Citizens..., 1855)