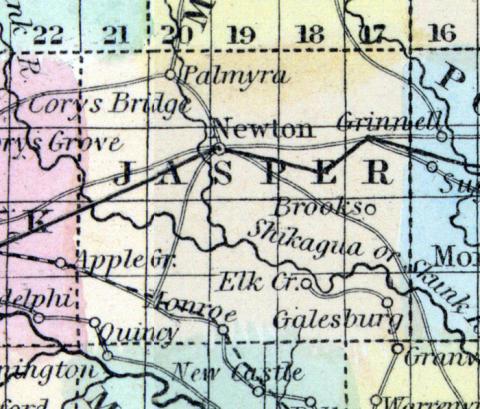 JASPER, a county in the central part of Iowa, has an area of 720 square miles. It is traversed by Skunk river and its North fork, which flow south-eastward. The surface is undulating, or nearly level; and the soil productive. The prairies of this county are large, and timber is deficient in some parts; but stone coal is abundant. Indian corn and butter are the staples. In 1850 this county produced 62,635 bushels of Indian corn; 4494 of wheat; 15,772 pounds of butter; and 541 tons of hay. The main road from Iowa City to Fort Des Moines passes through the county. Capital, Newton. Population, 1280.  (Baldwin's New and Complete Gazetteer of the United States..., 1854)

JASPER COUNTY   Is bounded on the east by Poweshiek, west by Polk, north by Marshall, and south by Marion and a portion of Mahaska Counties. In no county in the State, perhaps, is there better soil for all purposes than in Jasper.
The following description of this section of country we insert, from a communication to the "Iowa City Reporter":--- " Probably no portion of our State surpasses Central Iowa in point of beauty, fertility, healthfulness of climate, and the thriftiness of its inhabitants.
"The eye is pleased with the alternation of oak openings, timber land, and the crystal streams that murmur along their channels, guttered out of the prairies. A few years have elapsed since this portion of our State was marked by the Red man's track and the simple wigwam. Then the rich agricultural resources of Central Iowa were unknown to thousands who have since found homes in the "Prairie Land." Here the spirit of American enterprise has found a wide field for action, and, by its magic power, the hidden wealth that lies in the fat hill-sides is beginning to flow into the lap of Western industry. The wigwam has given place to the pioneer's home, and the sound of the Indian rifle has died away, and nought is heard but the sound of busy industry. Yes, a new people, possessing a new spirit, are now on the prairies of Central Iowa, grappling with the "strong-holds" of Nature, and building up towns and cities on the ground where a few short years ago was seen a collection of wigwams. The contemplated line of railroad from Davenport to the Missouri River runs through this portion of our State, and truly a great artery of trade will be demanded by the rapid growth of Western Iowa. Nowhere in the West has the hand of Western industry effected greater changes than in Jasper County, from which I now write.
"In 1846, the Senatorial Legislature formed it out of a portion of Mahaska County ; and, in 1847, Newton, the county-seat of Jasper, was laid out by Thomas Henderson and Jacob Fisher. At that time but few pioneers had pushed their way to Central Iowa, but the way had been "blazed" by the founders of the newly laid-off town, and in 1848 a few log-cabins were erected in Newton. A more favorable location could not be obtained. It is on the boundary between the North and South Skunk Rivers. The country around the town-site is rolling enough to render it entirely free from marshes, or anything that would give rise to deleterious miasmas. Many have been attracted to the place by the healthfulness of its position, and the country around. The log-cabin has been removed, and the stately frame-dwelling erected in its stead; the "old cabin" store-house no longer greets the eye, but on the site it occupied stands a store-house that would do credit to towns of more pretensions. The prospect of securing a railroad has infused a new zeal into the citizens of the place, and they have determined to erect a new court-house on the square which will reflect credit upon the enterprising spirit of Newton. The Methodists are taking steps to build a new church. Mercantile houses are being; erected as fast as possible, while those now operating are driving a heavy business. The mechanic and farmer are also keeping pace with the prosperity of town and county.
" Large quantities of fine stone-coal are found in the immediate vicinity of the place, and the traveller often finds it upon the surface of the ground. When we consider that this article seems almost inexhaustible, there can scarcely be a question as to the profitableness of almost any branch of mechanical and manufacturing industry which may be established in this portion of our State. Lime-stone, suitable for building purposes, is found on the banks of Elk Creek and Skunk River; this one article greatly facilitates the operations of our citizens in erecting buildings, and in many other ways. One grist-mill and two saw-mills are now in successful operation ; but the demand for mills is constantly increasing. Men of capital, and true Western spirit, are making arrangements to erect forges and work-shops, which, when completed, will render Newton quite a point for manufacturing."  (Iowa As It Is in 1855; A Gazetteer for Citizens..., 1855)