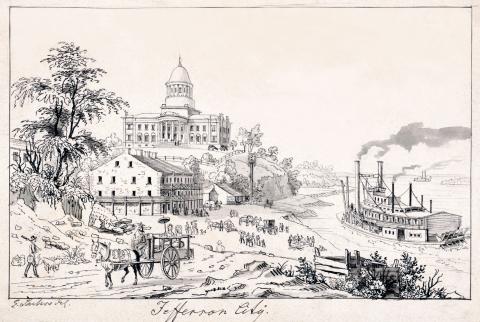 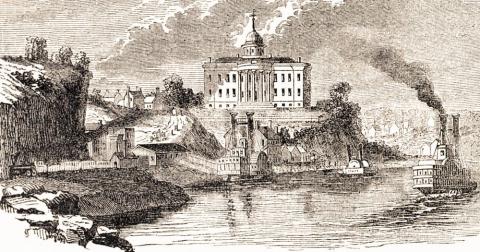 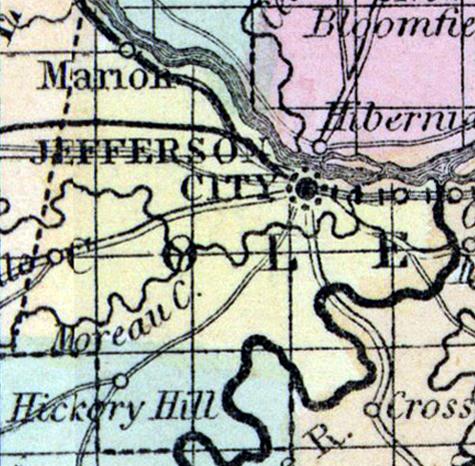 JEFFERSON CITY, capital of the State of Missouri, and seat of justice of Cole county, on the right bank of the Missouri river, 155 miles by water W. from St. Louis, and 980 miles from Washington. Lat. 38° 36' N. ; Lon. 92° 8' W. The situation is elevated and picturesque, commanding a fine view of the river and of the cedar-crowned cliffs on the opposite shore. It contains the state house, the governor's residence, a handsome building, and the state penitentiary. Two or three newspapers are published here. A railroad is projected from St. Louis to this place. Pop., in 1853, estimated at 3000.  (Baldwin's New and Complete Gazetteer of the United States ... 1854)

JEFFERSON CITY, The county seat of Cole county, and the capital of the State of Missouri, is beautifully situated on the south bank of the Missouri River, opposite the mouth of Cedar Creek, and 148 miles from its confluence with the Mississippi River, latitude 38° 36´ north, and longitude 92° 08´ west -- 980 miles west of Washington, and on the Pacific Railroad 125 miles from St. Louis.  The site of the city is elevated and uneven, and presents a fine view from the State House.  The principal buildings are the State House, one of the finest stone edifices in the country, the Governor's house, a fine and elegant mansion, the State Penitentiary, Churches, and several fine Hotels, viz: City, Virginia, Tennessee, and McCarty.  It contains several stores, manufacturers of wood and iron, cabinet furniture, boots and shoes, tinware, harness and saddles, clothing, wagons and carriages, and flouring mills, and a bank, a branch of the Bank of the State of Missouri.  The Jefferson Examiner is the official State paper, and is published by W.G. Cheney. There are three stage routes, as follows: from Jefferson City to Columbia, distance 30 miles; to Fulton City, distance 25 miles, and to Tuscumbia, distance 40 miles.  Population 3,500.  (The Missouri State Gazetteer and Business Directory, 1860)