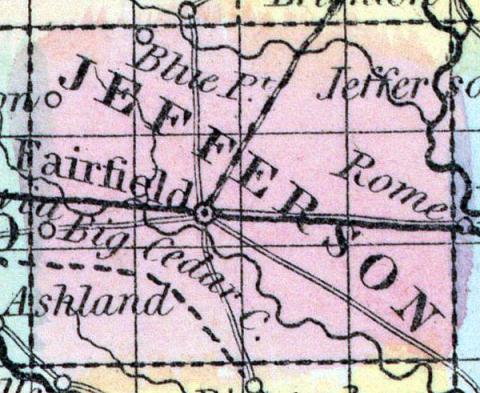 JEFFERSON, a county in the S. E. part of Iowa, has an area of 432 square miles. It is intersected by Big Cedar creek, and the N. E. part is drained also by Skunk river and by Warrior creek. The surface is diversified by rolling prairies, and by forests of oak, hickory, ash, maple, &c. The soil is good, well-watered, and easily cultivated. Wheat, Indian corn, oats, grass, cattle, and swine are the staples. In 1850 this county produced 705,296 bushels of Indian corn; 59,639 of wheat; 132,864 of oats; 127,338 pounds of butter; and 33,726 pounds of wool. Stone coal is abundant. A plank-road extends from the county seat to Keokuk. This county is among the most populous and best improved in the state. Capital, Fairfield. Pop., 9904.  (Baldwin's New and Complete Gazetteer of the United States..., 1854)

JEFFERSON COUNTY.  The first sale of town lots took place in 1839.
The present population of Jefferson County is about 13,000. Population of Fairfield, the county-seat, 1500.
A large proportion of the population is from Ohio and Pennsylvania. In the eastern portion of the county is a settlement of Swedes, consisting at present of about 100 families. Their first settlement in that part of the county was made in 1847.
There is also in the north-east a settlement of Germans.
In Fairfield there are three churches : Presbyterian, Congregational, and Methodist.
Two newspapers in Fairfield, the " Fairfield Ledger," (Whig), and the " Iowa Sentinel," (Democrat).
Jefferson County contains 88 schools, and 65 schoolhouses, 59 of which are frame, the remaining 6 brick. Total amount paid teachers during the year, ending Oct. 81, 1854, $5,588.12. The average compensation of male teachers for the same time, was $20.85 — that of females, $9.97 ! Number of pupils in schools, 3622.
A branch of the State University is located at Fairfield. A commodious building has been erected for the accommodation of pupils J and is now leased to a company of citizens, who have established a flourishing school for young men and boys, under the charge of Mr. Anderson, a teacher of experience and ability.
There is also a Female Seminary in this place, which is in a prosperous condition, conducted by Rev. L. B. Crittenden.
Of manufactories the principal are a steam saw-mill, an iron foundry, a sash and door factory, and numerous minor establishments. We need a steam flouring-mill. A United States Land Office is located in this place, which has been, and is still doing an extensive business. There are several thriving villages located in the different sections of the county, among which are Libertyville, seven miles south-west from Fairfield; Brookville and Abingdon, the former six, and the latter twelve miles west; Pleasant Plain, twelve miles north; and Glasgow in the southern part of the county.
There are three extensive nurseries in the county. A county agricultural society was organised three years ago.
The eastern part is well timbered. On the borders of Skunk River and its tributaries, are fine groves of various kinds of timber, suitable for building and fencing purposes. The most common are the white and burr oak, walnut, elm, cottonwood, and linn ; sugar maple is found in some places on Skunk River. The western portion of the county is principally prairie, interspersed with some groves of timber, and is well adapted to cultivation, as no portion of that land is too broken, and none too flat, for cultivation.
There is no land of any consequence in this county that is not already taken up. Much good land is owned by non-residents.
Farms in the hands of residents are beginning to assume all the appearances of extensive and tasteful cultivation.
There are extensive beds of coal in different sections of the county. Also lime-stone is found along the borders of some creeks.  (Iowa As It Is in 1855; A Gazetteer for Citizens..., 1855)