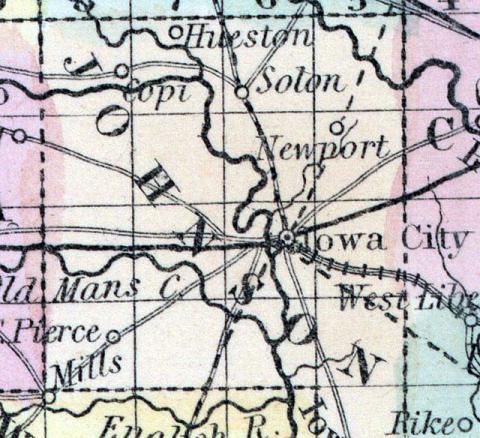 JOHNSON, a county in the E. S. E. part of Iowa, has an area of 616 square miles. It is intersected by the Iowa river, which divides it into nearly equal portions; Cedar river flows through the N. E. part; it is also drained by Oldman's and Clear forks. The surface is diversified, and the soil is said to be unsurpassed in fertility. A considerable portion of the county consists of prairies. Indian corn, hay, and butter are the staples. In 1850 this county produced 225,105 bushels of Indian corn; 54,081 of wheat; 68,909 pounds of butter, and 4615 tons of hay. Quarries of good building stone have been opened near the Iowa river. This stream affords extensive water-power, and is navigable by small steamboats in the county below Iowa City. Companies have been formed for the construction of railways through this county, from Dubuque to Keokuk, and from Davenport to Iowa City, which is the seat of justice, and also the capital of the state. Formed about 1839. Population, 4472.  (Baldwin's New and Complete Gazetteer of the United States..., 1854)

JOHNSON COUNTY   Is situated in the eastern part of the State, being the third county west of the Mississippi River, and the fourth north of the State of Missouri. It is bounded on the north by Linn county, on the east by Cedar and Muscatine, on the south by Louisa and Washington, and on the west by Iowa.
The Iowa River passes through the county, entering five miles south of the northwestern corner of the county, and running thence in an easterly direction for about 14 miles, turns south and runs nearly south, through Iowa City, and leaves the county five miles west of the southeast corner.
The county embraces T. 77, R. 5 and a small strip of T. 77, R. 6, (east of the Iowa River), also Townships 78, 79, 80 and 81, in ranges 5, 6, 7 and 8.
The following are the names of the several civil townships, eighteen in number: Big Grove, Cedar, Clear Creek, Fremont, Graham, Hardin, Iowa City, Jefferson, Liberty, Monroe, Newport, Oxford, Pleasant Valley, Penn, Scott, Sharon, Union and Washington. The Cedar River runs through the northeastern corner of the county.
The county was organized in 1837, by S. C. Trowbridge, Sheriff of Johnson county, appointed by the Governor of the Territory, whose duty it was under the then existing laws, to order elections, receive and canvass the returns, and give certificates of election to the officers elect at the organization of new counties.
The surface of the country is undulating with considerable level land, bordering on the rivers. Beautiful rolling prairies interspersed with groves of timber which resemble islands in the sea, with a soil as rich and fertile as the Delta of Egypt. The proportion of timber and prairie is in favor of the latter, the timber is scattered in about equal proportions through the different sections of the county.
The soil is adapted to the different varieties of small grain, and produces the best of corn, potatoes, onions, etc.
It is a good fruit growing country, and large quantities of every variety of fruit, berries, shrubbery, evergreens, etc., have been, and are still being planted. It is an excellent country for raising hogs, cattle, horses, sheep, etc., and many of the farmers and capitalists are turning their attention to raising live stock of all kinds.
All the various varieties of timber produced in the west are found in this county.
There is an abundance of stone and other building material.
“On the Iowa River, in Johnson county, the rocks are well exposed in the neighborhood of Iowa City, where there are numerous quarries, which have been opened to supply the town with lime and building materials. The layers are of very various lithological character In a quarry opened about a mile above the city, on the east side of the river, nearly opposite the mill, there is a thin bedded bluish limestone, which weathers of a dirty yellow. The layers dip about 5° in a direction S. 80° E. This rock is not durable enough to make a good building-stone when it is to be exposed to the weather: it will answer very well for underpinning. Nearer the town, on both sides of the river, the rock along the base of the bluffs is a dark-colored argillaceous limestone, which is crowded with fossils, especially corals, among which the general Favosites, Lithostrotion, Stromatopora are the most frequent.
Higher up, the rock becomes more compact and less distinctly stratified: it is almost a pure carbonate of lime, containing hardly more than one per cent. of other substances. It forms a durable building-stone, although not splitting or dressing handsomely. When polished, the large coralline masses which it contains, especially the Lithostrotion, are very beautiful; and pieces have been worked up into small-ornaments, such as paper-weights, and are well known under the name of “Iowa marble.” The same rocks may be observed at various points up the Iowa for a distance of ten or twelve miles from Iowa City.”—Geology of Iowa.
The Mississippi and Missouri Railroad runs through the county from east to west, and the railroad from DuBuque to Keokuk, will pass through it from north to south.  (Hair's Iowa State Gazetteer..., 1865)