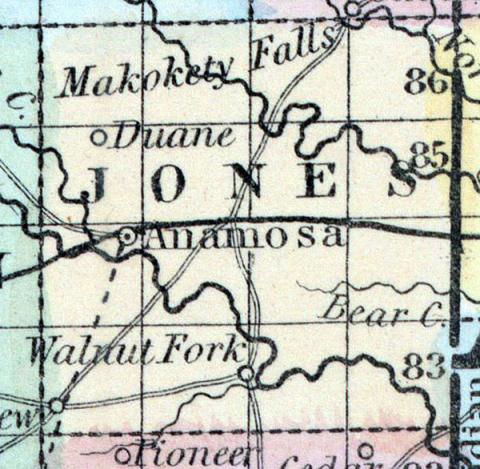 JONES, a county in the E. part of Iowa, has on area of 676 square miles. The Wapsipinicon and Makoqueta rivers, affluents of the Mississippi river, flow through the county in a S. E. direction; it is also drained by Fall river and Bear creek. The surface is diversified by prairies and woodlands; the soil is highly productive. Grain of various kinds, potatoes, grass, cattle, and swine are the staples. In 1850, Jones county produced 99,070 bushels of Indian corn; 38,523 of wheat, and 3371 tons of hay. It is intersected by railway routes leading to Dubuque and Keokuk. Limestone is one of the principal rocks of the county. The larger streams furnish valuable water-power. Named in honor of George W. Jones, United States senator from Iowa. Capital, Anamosa. Pop., 3007.  (Baldwin's New and Complete Gazetteer of the United States..., 1854)

JONES COUNTY   Was first settled in 1836, organized in 1889, and the county-seat located at Anamosa in May, 1847. The population of the county in October, 1854, was 6300 — being about eleven to the square mile. In this county will be found a due proportion of timber land and prairie land ; while the mill-sites upon the Wabsipinnicon are numerous, and building-stone abundant. Beside the Wapsie', are the North and South Forks of the Maquoketa, Bear, and Mineral Creeks, and numerous first-rate springs of good water. The towns in the county are Anamosa, Rome, Bowen's Prairie, Fairview, and Monticello. In Anamosa is published one newspaper, "The News.'' There are also one Congregational and one United Brethren church edifices, and organizations each, of Methodists, Christians, and Universalists. The Masons and Odd Fellows each have Lodges there. The Iowa Central Air-Line Railroad passes through the county, touching at Anamosa. This line is located and under contract as far as Marion, Linn County.  (Iowa As It Is in 1855; A Gazetteer for Citizens..., 1855)