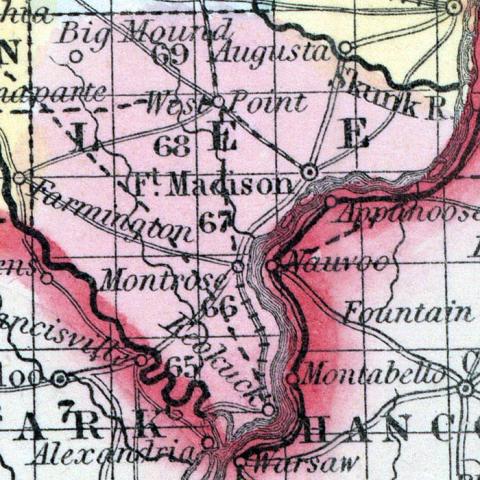 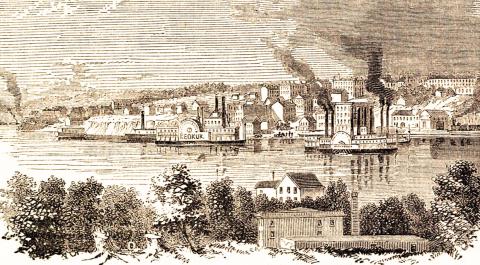 KEOKUK, a flourishing town of Iowa, and semicapital of Lee county, is situated at the foot of the "Lower Rapids" of the Mississippi river, 205 miles above St. Louis, and 125 miles S. from Iowa City. It is at the head of navigation for the larger class of steamers, and the natural outlet of the fertile valley of the Des Moines, which is the most populous part of the state. A line of splendid steam-packets communicates daily between Keokuk and St. Louis. The number of steamboat arrivals in 1852 was stated to be 795. The Lower Rapids are eleven miles in extent, in the course of which the river has a fall of 24 feet. The cargoes of vessels ascending the river are transhipped over the rapids by lighters drawn by horses, and then reshipped on board of steamboats for their destination. Keokuk stands on a basis of fine limestone, affording an excellent material for building. It contains the medical department of the state university, 6 or 7 churches, 3 academies, several public schools, and a hospital. Two weekly newspapers and 1 medical journal are published here. The town contains also between 80 and 90 stores, 2 steam flouring-mills, and 2 iron foundries. The reported value of merchandise sold here in 1852 was $1,345,000. A railroad is in course of construction from this place to Dubuque, 180 miles. Keokuk is thought to be one of the most eligible points for bridging the Mississippi, which is here about 1 mile wide. The river flows over a bed of limestone, and is bordered by bluffs which rise abruptly nearly 150 feet high. Between these bluffs is an island 1700 feet wide. The population of Keokuk in 1845 was 460; in 1852 it amounted to 3963; in 1853, to about 5000. (Baldwin's New and Complete Gazetteer of the United States..., 1854)

KEOKUK  The city of Keokuk, the largest place in the county [Lee County], is situated at the foot of the Des Moines or Lower Rapids, at the extreme south-east corner of the state. By the usual routes of travel it is 230 miles from Chicago; 210 from St. Louis; 400 from the junction of the Ohio and Mississippi; 1000 from New York; and 1400 from New Orleans. Its position as a central commercial point is scarcely equalled by that of any other city west of Chicago, and endows it with business advantages and facilities of the highest importance. These advantages are three-fold, and may be treated of under the three following heads, viz : — First those derived from the navigation of the Mississippi. The Lower Rapids, formed by a rocky stratum in the river, commencing about 200 yards above the city, and running northward a distance of 12 miles, with a fall of 24 feet, render Keokuk the head of navigation during a great portion of the year, until the work of improving the Rapids is completed. At present, in time of low water, steamers are obliged to unload their cargoes into "lighters," which are towed up the Rapids, above which the freight is again loaded into the boats; and thus this city is rendered a wholesale depot, and place of transhipment. The second point lies in the trade of the Des Moines Valley which Keokuk must inevitably command, situated but 2 miles above the confluence of the Des Moines and Mississippi Rivers. This valley, for a width of sixty miles on either side of the Des Moines River, is unsurpassed probably in the world for agricultural wealth. It also abounds in timber, coal, gypsum, and many other articles of trade, and these will be transmitted down the Des Moines to its mouth at Keokuk, thence re-shipped to other markets. Of the improvement of the Des Moines we speak at length in another Chapter. The third source of business advantages which Keokuk can claim, lies in its railroads. The Keokuk and Fort Des Moines, the Keokuk, Mt. Pleasant and Muscatine, and the Eastern railroads will soon be built, and will afford this city numerous connections of the highest importance. Keokuk is situated upon a bluff 150 feet above high-water mark in the Mississippi, is laid out one mile square, and contains a population of nearly 7000. Its streets are wide and regular, and are being graded and McAdamized with rapidity. Main Street, 100 feet in width, is McAdamized through the city for a distance of one mile. The city contains six brick-yards, two lumber-yards, one flouring and grist-mill, two foundries, one machine shop, five hotels, &c. Its public school is held in the largest and handsomest building, which, throughout the State, is devoted to the cause of education. The edifice, when fully completed, will have cost $13,500. This city also contains the Iowa Medical College, a State institution, and a Female Semi- nary, besides two other female institutes, and a number of private schools. Six church edifices, O. and N. S. Presbyterian, Baptist, Methodist, Episcopalian and Catholic. One weekly and two daily newspapers. The bluff on which the city stands contains the finest of limestone, for building and other purposes, and commands a landscape view, of wild and picturesque beauty.  (Iowa As It Is in 1855; A Gazetteer for Citizens..., 1855)

KEOKUK is situated on the Mississippi River, near its confluence with the DesMoines, about two hundred miles above St. Louis. It lies at the foot of the Lower Rapids, and is the head of navigation for the larger class of steamboats, and is fully entitled to its name of the “Gate City” of Iowa. The population is 11,000, and is one of the most enterprising communities in the West. It is in a healthy climate, in North lat. 40° 20', and lon. 14° 20' west from Washington, on a high limestone bluff, surrounded on all sides by a rich and productive soil. The plan of the village was laid out in the spring of 1837, and in the ensuing June a public sale of town lots was held, and attended by a very large crowd. One boat was chartered in St. Louis, and numbers came up on other boats. Only two or three lots, the southwest corner of Main street and the Levee, and one or two others lying contiguous, were sold. The corner lot went for $1,500. In 1840 the main portion of Keokuk was a dense forest, and where main street now is, was thick timber and underbrush. About a dozen cabins comprised all the improvements. In the spring of 1847, a census of the place gave a population of 620. Now it is a well built city, principally of brick buildings, many of which will compare favorably with those of St. Louis or Chicago, the private residences being particularly ornate and tasteful. Main street presents a lively and animated appearance being one mile long, and 100 feet wide.
A very large wholesale business is done here, both in groceries and dry goods, and numerous manufactories attest the growth and prosperity of the city. Three railroads centre here, the DesMoines Valley, the Keokuk, Mt. Pleasant & Minnesota, and the Iowa Southern. The DesMoines Valley Railroad is emphatically a Keokuk enterprise, resulting entirely from the energy of the citizens. It is completed to Monroe, 130 miles, and will reach DesMoines, the capital of the State, in the spring or summer of 1866. It is already doing an immense business, and will, upon reaching DesMoines, inevitably be the best paying road in the State.
In view of the advantages of Keokuk; its favorable location as a distributing point to all parts of the country; the indomitable energy of the citizens; its facilities for educational purposes, and its proverbial salubrity, it offers to the manufacturer, the mechanic and the merchant, advantages unsurpassed by any other point in the Mississippi Valley.
The various religious denominations are fully represented, there being handsome and commodious church edifices for the accommodation of Methodist, Episcopal, Baptist, Presbyterian, Roman Catholic,  Congregational, Lutheran and African congregations.
Keokuk ranks as the fourth city in the United States as a pork packing point, the business amounting to more than a million and a half dollars annually. There are four large foundry and machine shops, and a very extensive car factory connected with the DesMoines Valley Railroad. The income returns for 1864, as shown by the assessors' books, amounted to $900,000, while the number of licenses to wholesale and retail dealers, etc., exceed those of any other city in the State. The Medical College is an excellent brick building, with stone basement, and surmounted by a handsome dome. It affords ample accommodation for a large class of students. The hotel accommodations consist of three first-class houses, and numerous smaller ones. The United States Circuit Court and the District Court of Lee County each convene here semi-annually, for which purpose, a handsome and commodious court house has been erected on Fifth-street, affording, in addition to the court room, offices for the various officers connected with those courts. The bluff land, in the immediate vicinity of Keokuk, was known among the Indians as the Medicine Ground, thus affording additional evidence of the salubrity of the location. To sum up, we quote the words of on old and much respected settler: “We have the location and we have the vim, and if they will not achieve a large city, then the fates are against us.” (Hair's Iowa State Gazetteer..., 1865)