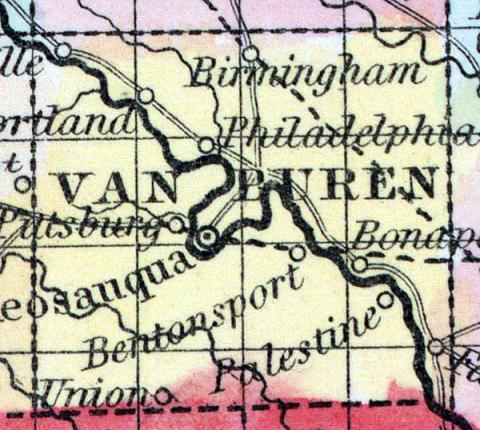 KEOSAUQUE, a flourishing post-village, capital of Van Buren county, Iowa, on the left bank of the Des Moines river, 78 miles S. by W. from Iowa City. It is surrounded by a rich farming district, in which many improvements have been made, and has an active trade. A bridge has been built across the river, which is here about 800 feet wide. Keosauque has mills of various kinds, moved by water and by steam-power. Two newspapers, ore published weekly.  (Baldwin's New and Complete Gazetteer of the United States..., 1854)

KEOSAUQUA, the county-seat [Van Buren County, Iowa], was laid out and settled in 1837. The proprietors were Messrs. James Hall, John Fairman, John Cams, M. Sigler, and E. Manning. The population of Keosauqua is about 1000; of the county, by last census, 13,843. There are two thriving churches, Congregationalist and Methodist, and several other religious societies. There. is one newspaper, the Democratic Union published in Keosauqua. No other in the county. One public school, having from 100 to 120 scholars in attendance. There are also one private school for young ladies, and two high schools, all well patronized and supported; in addition to which, the citizens of Keosauqua contemplate the building of a seminary during the present year. There are three grist-mills in the town and vicinity, (one water-power and two steam,) and also two saw-mills. The water-power that is now about to be furnished, by the completion of the lock and dam at this place, will not be surpassed in the State. A woollen manufactory, paper mill, and manufactories of shingles, plows, wagons, and agricultural implements, and also a good merchant flouring-mill, are very much needed. The inducements are readily seen and understood by practical men. (Iowa As It Is in 1855; A Gazetteer for Citizens..., 1855)