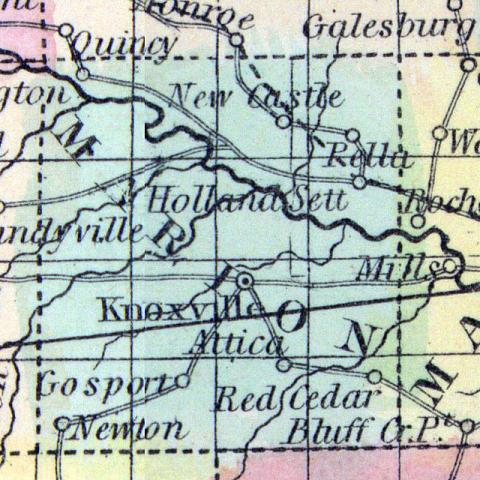 KNOXVILLE, a thriving post-village, capital of Marion county, Iowa, 100 miles W. S. W. from Iowa City. The railroad which is projected from Davenport to Council Bluff is expected to pass through this place.  (Baldwin's New and Complete Gazetteer of the United States..., 1854)

KNOXVILLE is the county seat of the county [Marion County, Iowa], and was laid out by the commissioners of the county, and the first lots were sold on the 29th day of October, 1845. It is an incorporated city, and located near the centre of the county on the south side of the Des Moines River. Its nearest railroad station is Pella, a distance of twelve miles. It contains about twelve hundred inhabitants. It is situated on high and beautiful rolling prairie, near the timber of White Breast and English Creeks, and has plenty of stone coal within less than a half mile. The first settlers were Luther C. Conrey, Lysander W. Babbitt, Lewis Pierce, and George Gillaspy. The first dwelling house was built by Dr. Luther C. Conrey.— The country surrounding Knoxville is very well adapted for agricultural purposes. Good building materials, consisting of stone and timber, and good clay for brick, is easily obtained in the immediate vicinity of the city. There are six church buildings in the city, one belonging to the Episcopal Methodists, one to the Missionary Baptists, one to the Presbyterians, one to the Christians, one to the Lutherans and one to the Adventists. It contains a new, large and beautiful court house built on the public square, situated in the centre of the city. The public square contains about one acre and a half, and is planted with handsome and beautiful shade trees. It has a very fine large brick public school house, situated in a beautiful grove of elms, in the suburbs of the city, which will contain more than five hundred pupils. It contains one Chapter of Masons, No. 18, who hold their regular meetings the first Monday before the full moon; one Masonic Lodge No. 61, who hold their meetings the first Friday before the full moon; one Odd Fellow's Lodge, No. 90, who hold their meetings every Tuesday; one Lodge of Good Templars, No. 173, whose regular meetings are every Saturday evening. There is a weekly newspaper here, published by B. F. Williams, called the Marion County Republican, which is issued Tuesday. There is a very beautiful fair ground, containing ten acres, and situated in a grove, which belongs to the agricultural society of the county, in which the district fair has been held the past year. It is about a half mile north of the city, and is said to be one of the most beautiful fair grounds in the State. The society is in a very prosperous condition, and a great interest is manifested, in agriculture, stock, and the general products of the soil in the county.  (Hair's Iowa State Gazetteer..., 1865)