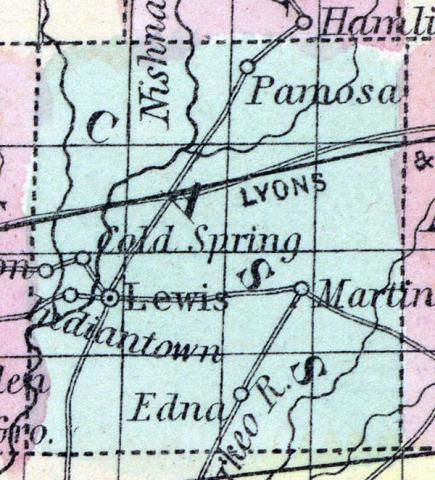 LEWIS, the county seat of Cass county, is situated on the east side of the Nishnabotany River, and at the junction of the two great wagon routes across the State. The nearest shipping point is Council Bluffs, on the Missouri River, fifty miles west, but the great number of emigrants that yearly pass through, on their way to Colorado, California, Idaho, &c., makes a ready market for all kinds of produce. The town was laid out in February, A. D., 1854, by David Chapman, surveyor. Among the first settlers were S. M. Tucker, S. H. Myers, Charles Woodward, Daniel Stanley, Jas. S. Rand and J. W. Benedict. The first house was built by S. M. Tucker, and is still standing. The first white child born in the town was George D. Tucker. There is a good mill site on the river adjoining the town, on which has been erected and is now in operation, a large flouring mill, with saw-mill attached. Limestone is abundant in the immediate vicinity, and within one-fourth mile of the town plat there are two quarries of brown sandstone, of which a number of buildings in the town and vicinity have been built. The Methodist was the first church organized. Their church building was completed several years ago. The Congregationalists and Baptists each have church buildings nearly completed. The Masons and Good Templars each have an organization. The former, Lewis Lodge, No. 137, meets Monday evening on or before the full moon of each month. The latter, Minnehaha Lodge, No. 113, meets Tuesday evening of each week. The Cass County Messenger, weekly, is published by H. C. Johnson. Population, about 300.  (Hair's Iowa State Gazetteer..., 1865)