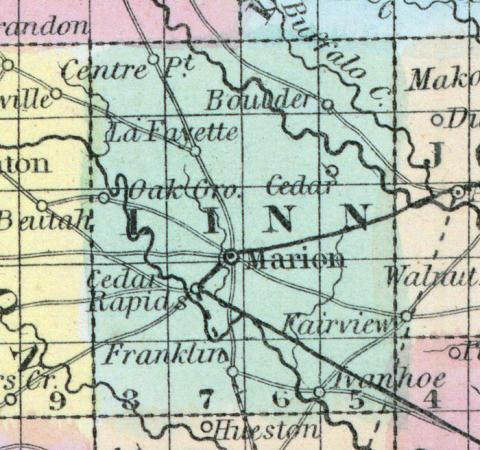 LINN, a county in the E. part of Iowa, has an area of 720 square miles. It is intersected by Cedar and Wapsipinicon rivers, which flow in a S. E. direction, affording abundant water-power; it is also drained by Prairie and Buffalo creeks. The surface is agreeably diversified, and the county is said to be well timbered. The soil is excellent, and the water good. Wheat, Indian corn, oats, grass, wool, potatoes, and pork arc the staples. In 1850 this county produced 306,390 bushels of Indian corn; 85,633 of wheat, and 6144 tons of hay. A railroad is projected through the county from Dubuque to Keokuk. Capital, Marion. Pop., 5444.  (Baldwin's New and Complete Gazetteer of the United States..., 1854)

LINN COUNTY Is a large and comparatively populous tract. The towns in the county are, Marion, (the county-seat), Mt. Vernon, Spring Grove P. O., Boulder P. O., Central Point, Cedar P. O., Oak P. O., Palo P. O, Lafayette, Cedar Rapids, Newark, St. Julien, Ivanhoe, and Hoosier Grove.
The present population of the county is 10,075.
Newspapers are published at Marion and Cedar Rapids. The number of churches and schools in the county, or even of towns, other than Mt. Vernon, we are unable to state, but are informed that no county in the State, of the same population, has more of either, in better condition.
The " Iowa Conference Seminary," is located at Mount Vernon — has a brick edifice 40 by 72 feet, 3 stories high. It is in a very prosperous condition, under the superintendence of Rev. -S. M. Fellows, A. M., assisted by three regular teachers, besides music teacher, and teacher of painting and embroidery. Number of students now in attendance about 150. Most of them young ladies and gentlemen from abroad. The situation is unsurpassed for beauty.
There is a good district school in the village, with a good school-house.
Mills are very much needed, and would do well. There is a large amount of timber in the neighbourhood, for sawing.
The surrounding country is one of the finest agricultural regions in the State. The farmers have already erected pretty good buildings, and every year improvements are going forward.
Linn County is considered one of the best, if not the best in the State; and the country around Mt. Vernon is acknowledged equal to any portion of the county.
The location of the Seminary at this place, in connection with the real excellence of the country, makes this one of the most desirable situations for a family residence that can be found in the West. We are about 70 miles from Dubuque, 55 from Davenport; 45 from Muscatine; 20 from Iowa City; 12 from Marion (the county-seat); and 14 from Cedar Rapids.  (Iowa As It Is in 1855; A Gazetteer for Citizens..., 1855)