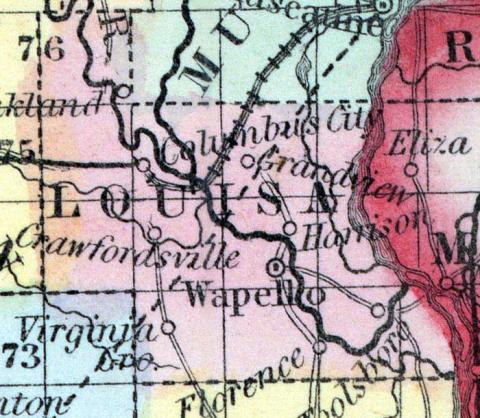 LOUISA, a county in the E. S. E. part of Iowa, has an area of 400 square miles. The Mississippi river forms its entire eastern boundary, and the Iowa river flows through the middle of the county, which is drained also by Long creek. The soil and timber are said to be good. Corn, wool, and butter are the staples. In 1850 this county produced 379,449 bushels of Indian corn; 49,713 of wheat; 11,681 pounds of wool, and 89,642 of butter. It contained 7 churches, 1 newspaper office, and 674 pupils attending public schools. The streams furnish valuable water-power. Limestone and stone coal are found. The Iowa river is navigable by steamboats. Capital, Walpello. Population, 4939.  (Baldwin's New and Complete Gazetteer of the United States..., 1854)

LOUISA COUNTY.   This is a rich and fertile county, bordering on the Mississippi ; bounded on the west by Washington and Henry Counties, on the north by Muscatine, and on the south Des Moines Counties. The county is well watered by the Iowa River, which passes diagonally through it. J. B. Newhall, Esq., in his "Glimpses of lowa," thus describes Louisa County : ---
"Wapello Prairie, on the south side of the Iowa River, is unrivalled in picturesque beauty. It commences near the village of Florence, the site of the old Sac village, and, crossing a small rivulet skirted with woods, it breaks forth upon the eye of the traveller in picturesque grandeur, terminating in the north-west with the town of Wapello, the county-seat of Louisa.
"This county embraces a principal portion of the Keokuk Reserve, purchased by the Government in 1836. It is a remarkable fact, that almost the whole tribe of Sacs and Foxes were congregated here until after the first or Black Hawk purchase of 1832; notwithstanding they had almost a boundless region from which to select their villages and hunting-grounds.
"Wapello, the seat of justice, is handsomely located on the old site of 'Wapello's Village.' Wapello was a Fox chief, who resided there until the summer of 1836, as chief of his band. There are several small villages in Louisa, among which are Toolsboro', Columbus City, Harrison, Florence, Fredonia, &c. Toolsboro' — formerly Black Hawk, — is situated upon the north side of the Iowa, about three miles from the Mississippi, has an extensive country trade, and is somewhat celebrated for its ancient mounds and fortifications.
''Florence derives its principal notoriety from its having been the residence of Black Hawk until the Indian hostilities in 1832. Here repose the bones of his ancestors, where they have rested for centuries. It was here that he sounded the war-whoop, and rallied his countrymen to the last deadly conflict, in defence of the homes and the graves 'Where sleep their warriors ; where rival chieftains lay, And mighty tribes, swept from the face of day.'
But they were conquered, and this illustrious warrior was doomed to wander, a stranger in the land of his forefathers. His lodge was still standing at the time the country was surveyed."  (Iowa As It Is in 1855; A Gazetteer for Citizens..., 1855)