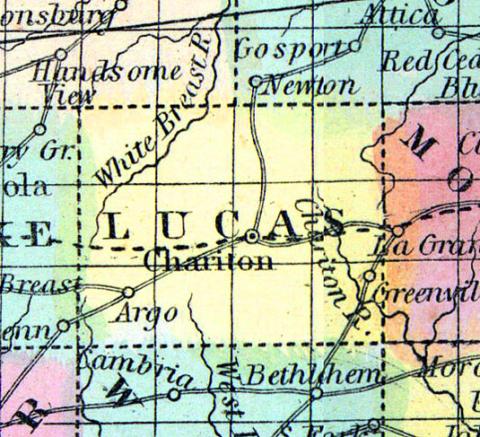 LUCAS, a new county in the S. part of Iowa, has an area of 430 square miles.  Whitebreast river, an affluent of Des Moines, flows through the county in a N. E. direction; the Chariton river, an affluent of Missouri, traverses the S. part; the county is also drained by English and other creeks. The surface is diversified with rolling prairies, and groves of hard timber; the soil is generally fertile, producing Indian corn, wheat, potatoes, grass, &c. In 1850 this county produced 11,925 bushels of Indian corn; 605 of wheat; 2771 pounds of butter, and 100 tons of hay. Capital, Polk. Pop., 471.   (Baldwin's New and Complete Gazetteer of the United States..., 1854)

LUCAS COUNTY.  This county is situated in the second tier of counties from the southern boundary line of the State; and about midway between the Mississippi and Missouri Rivers. The land is high and rolling, though generally not rough; being of the very best quality for farming purposes. It is well supplied with coal, and has timber sufficient for the improvement of the prairie lands.
This county has at present a population of about six thousand three hundred and fifty.
The first settlement in the county was made in 1847, by a party of Mormons. They located on what is now known as Badgers farm, then called “Chariton point;” about one and a half miles southeast of the present town of Chariton. They erected a few rude log huts, and remained here about one year. In 1848 Buck Townsend, William McDermott, John Ballard, Thomas Wilson, James Barker, and one or two others settled in the county. Barker was the preacher for the new colony, and it is said that he got off some very good sermons, when he happened to be sober, which was seldom the case.
The settlement rapidly increased. In 1849, James T. Robinson and Wm. T. May, commissioners, located and laid off the town of Chariton. The first house built in the town was a split log house, built by Beaverly Searcy on the southwest corner of the square, where it still remains.
The early settlers engaged largely in land speculations. Each man had his pockets full of land claims which he proposed selling to the new comers.
It is said that as late as 1850, it was almost impossible for a new settler to find a tract of land in the county, suitable for farming purposes, which was not already claimed. He found every desirable tract blazed and staked off; and he also soon learned that if he remained in the county he must strictly observe a code of laws, enacted by a legislative body called “The Settlers Club", or “The Home Protection Society.”
Numerous interesting legends are told, of the hair-breadth escapes of speculators who attempted to enter lands claimed by settlers; and if all told is true, many a “land shark,” after a hasty retreat, has returned thanks for a safe deliverance from the clutches of the “Home Protectors.”
In 1853, the land office was established in Chariton; and then began a new era in the history of the country. A class of men called “Land Sharks”, concentrated at Chariton, to prey upon the emigrants that were now fast pouring into the country. They were always prepared, for a consideration of twenty-five or fifty dollars, to furnish the new-comer with numbers of the very best of land, and assist him in entering it. If he desired to see the land before he invested, it would only take them a few hours to drive him out and show him some beautiful tract of land, which was perhaps several miles from the land he was really buying. Of course he was well pleased, and perhaps did not find out the “trick" until he had paid taxes for several years on some inferior tract of land. There is a beautiful tract of land situated three miles west of Chariton called “Hickory point” which, it is said. was thus disposed of to at least fifty persons. But this class, like the red man flying from civilization, vanished at the approach of the long emigrant trains of steady and industrious farmers from Ohio, Indiana and Illinois, who were seeking permanent homes in Iowa. They did not come here for the purpose of speculation, nor simply for the purpose of investing some surplus capital, but to settle and improve the country. During the years which intervened between 1850 and 1857, the appearance of the county underwent a material change. The broad prairies were specked with farms, the hum of mills was heard in the timber, school houses were erected, and in all parts of the county were seen evidences of industry and permanent improvement. Property rapidly increased in value, extensive dry goods stores were established in Chariton, which soon became an active trading town. The town and county continued to improve until the crisis of 1857 which checked improvement for a few years. This county has furnished 650 volunteers for the Union army during the late rebellion.  (Hair's Iowa State Gazetteer..., 1865)