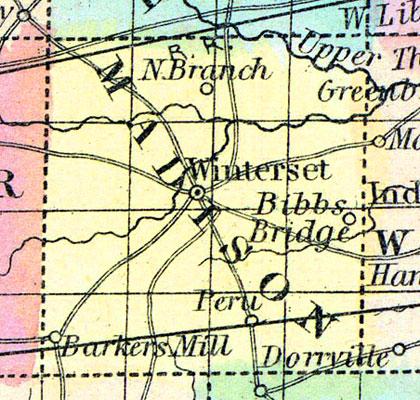 MADISON, a new county in the S. W. central part of Iowa, has an area of 576 square miles. The North and Middle rivers, affluents of the Des Moines, traverse the county from W. to E.; it is also drained by Prairie branch of Middle river. Extensive prairies occur in the county. The soil is productive and well watered. Indian corn, butter, and wool are the staples. In 1850, Madison county produced 26,250 bushels of Indian corn; 842 of wheat; 1410 pounds of wool, and 6005 pounds of butter. There were 56 pupils attending public schools, and 25 attending another school. Large beds of stone coal are found. Capital, Winterset. Pop., 1179.  (Baldwin's New and Complete Gazetteer of the United States..., 1854)

MADISON COUNTY  Is situated in the third tier of counties from the southern boundary of the State, and the fourth east from the Missouri River. It is bounded on the north by Dallas county, on the east by Warren, on the south by Clark and Union, and on the west by Adair.
The general surface of the county is gently rolling, and the soil, which is a black sandy loam, is from two to four feet deep. It is well watered by streams, which flow from west to east into the DesMoines River, the principal of which are Middle River, which runs through the heart of the county: its tributaries, which drain the southern part, and North River, which flows through the northern portion. A branch of Grand River flows through the southwestern township. These streams are generally skirted with timber. They afford many good water-powers, some of which are improved.
The best of both sand and limestone for building purposes is found all over the county. Good coal is also obtained in many localities. This county, for stock raising and all agricultural purposes, cannot be excelled, and is equalled by very few, if any, counties in the State.
The county is twenty-four miles square, and contains sixteen townships, viz: Crawford, Douglas, Grand River, Jackson, Jefferson, Lee, Lincoln, Madison, Monroe, Ohio, Penn, Scott, South, Union, Walnut and Webster. The line of the Burlington & Missouri River Railroad is located through the county.  (Hair's Iowa State Gazetteer..., 1865)