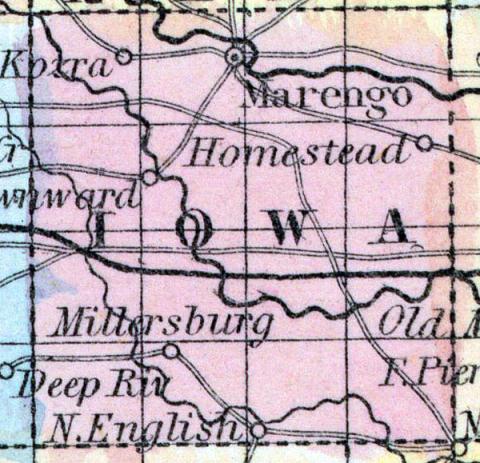 MARENGO, a post-village, capital of Iowa county, Iowa, on Iowa river, about 35 miles W. N. W. from the capital of the state.  (Baldwin's New and Complete Gazetteer of the United States..., 1854)

MARENGO is situated on the line of the Mississippi & Missouri Railroad, on the banks of the Iowa River, and is the county seat of Iowa County. It is an incorporated town of about 800 or 1000 inhabitants. It has three churches, Methodist Episcopal, Presbyterian and Catholic; one newspaper, published weekly, F. A. C. Foreman, editor and proprietor; one Masonic lodge, meets Monday evening on or before full moon; three dry goods stores, five grocery and provision stores, two drug stores, two hardware stores, one tin and sheet iron manufactory, one book store, three boot and shoe shops, three millinery shops, three hotels, one steam flouring and one water mill, two steam saw mills, one harness shop, one jeweler, one picture gallery, two wagon shops, three blacksmith shops, one cooper shop, one tailor shop, two butchers, five physicians, seven lawyers and one school house. Marengo is the principal point in the county for the shipment of the surplus produce, cattle, hogs, horses, etc., raised in this section, a large amount being sent to market from this place every year. It is destined to be quite a flourishing town, as there is now another line of railroad proposed to run through Marengo, north and south, connecting at this point with the Mississippi & Missouri road.   (Hair's Iowa State Gazetteer..., 1865)