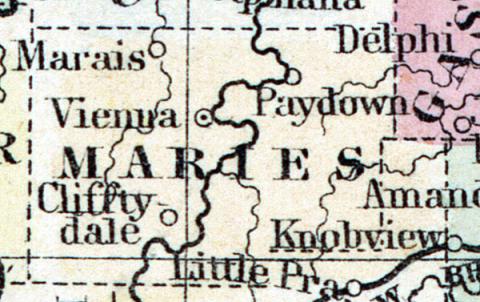 MARIES COUNTY   This county was formed from the north part of Pulaski and the southern portion of Osage Counties, by an act, approved March 2d, 1855, and had a population, in 1860, of 4946. Portions of this county have been settled for twenty-five or thirty years.
Physical Features.—The general surface of the county is broken timber land; however, very good soil is found in the valleys of Spring Creek, along the Maries, on the Dry Fork of the Bourbeuse, in Lane's prairie and the adjacent timber lands. Stock growing and fruit and grape culture could be profitably prosecuted in this county.
Minerals.—The State Geologist reports deposits of lead, iron, and copper ores, in various localities in this county; but little attention has been paid to mining. The Central Missourian, published at Vienna, dated October 29, 1859, says: "The lead mines recently opened by Wiley Williams, in the northwestern part of this county, bear favorable indications of being one of the richest deposits of lead in the State; Mr. Williams took out 1300 pounds of pure lead ore, in two hours and a half, on Monday last. The copper mines, which eleven years ago were abandoned by Mr. John Crismon, having since been reopened by Dr. Latham, have already yielded a large amount of rough ore which when smelted yields a large per cent, of blister copper, and as the work goes deeper, the virgin copper appears in greater quantities, with unmistakable indications, apparently, of finding a rich lead of the pure ore. Tons, we are told, of this composition ore were thrown out which had been condemned as worthless by the miners, is now considered as being valuable for smelting. We are not sufficiently advised in mineral prospects to speak positive of the indications here, but basing our judgment upon the opinions of those who are best informed, we have no hesitation in expressing the belief that not only lead, but copper mining, in this county, will form no inconsiderable part of the future wealth of Maries County."
The particular location of the minerals already discovered are given in the Geological Report of the southwest branch of the Pacific Railroad, pages 34, 46, 62, and 72. The county is watered by the Gasconade River, Maries Creek, and their tributaries.
Churches and Schools.—There are church organizations of the Baptist, Episcopalian, Presbyterian, Christian, Methodist, and Roman Catholic denominations; but as yet no buildings have been erected for their meetings. There are 34 school districts, but about 12 schools taught in the county. The State appropriated $1223.37 for school purposes in 1859. An effort will soon be made for the erection of good school-houses and churches, and to secure the proper education of the youth of the county.
VIENNA, the county-seat, is agreeably situated, and is the only town of importance in the county; population 250. It has several stores, 2 groceries, 4 carpenters, 1 newspaper, 1 blacksmith, 1 wagonmaker, 1 hotel, 1 water-power flouring-mill, 1 steam saw-mill, 2 lawyers, and 3 doctors.  (Parker's Missouri as it is in 1867..., 1867)