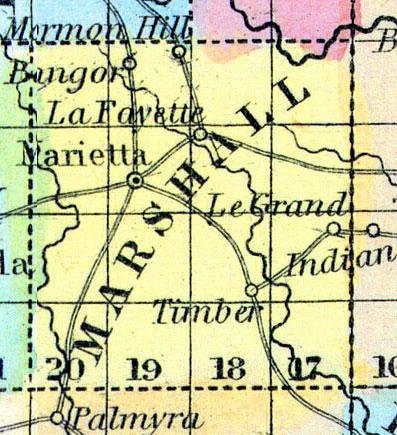 MARIETTA is in Marietta township, about six miles northwest of Marshalltown. It is situated on bottom land, about one-half mile south of the Iowa River. It is protected from high winds by the bluffs on the south and west, and on the north by the timber which skirts the Iowa. It has a population of about two hundred inhabitants. There are several dry goods and grocery stores in town, and most of the mechanical arts are carried on. A large brick school house has been erected, which compares favorably with any in the State, and would be an ornament to any town.
The town site was selected and surveyed by Messrs. Hobbs & Dawson, October 11, 1851, and the county seat located there, since which time an extensive addition to the town has been made by Messrs. Boardman & Leaming. In 1856, a vote for the removal of the county seat was taken, between Marietta and Marshall, resulting in favor of the former. In 1858, the contest was renewed, resulting in favor of Marshall, but it continued to remain at Marietta until December, 1859, when the books and records were removed to Marshall.  (Hair's Iowa State Gazetteer..., 1865)