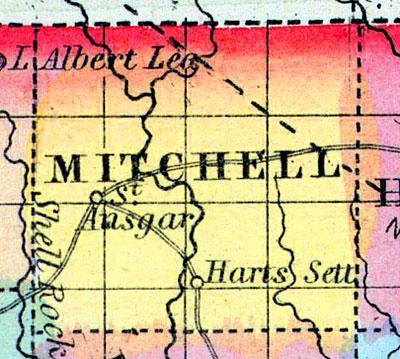 MITCHELL, a new county in the N. part of Iowa, bordering on Minnesota, has an area of 420 square miles.  It is intersected by the Cedar river, which flows in a S.S.E. direction.  This county is not included in the census of 1850, and has few, if any, civilized inhabitants.  Named in honor of Mitchell, the Irish patriot.  (Baldwin's New and Complete Gazetteer of the United States..., 1854)

MITCHELL COUNTY   Was organized in 1854, and is situated in the northern tier of counties, the fourth west of the Mississippi River. It is bounded on the east by Howard County, on the south by Floyd and on the west by Cerro Gordo and Worth. It was first settled in 1853. It is one of the smaller counties, being twenty-one miles north and south, and twenty-four miles east and west.
It is watered by the head waters of the Wapsipincon, which flow through the northeast corner; by the Little Cedar River, flowing from north to south, east of the centre, and by the Cedar River, flowing in a southeasterly course, through the southwestern portion of the county. The headwaters of the Wapsipinicon flow through a level and rather marshy region. They are, however, heavily skirted with timber. The Cedar, and its branches, are beautiful and rapid streams, skirted with timber and furnishing good water power, at numerous points. There are also many rock exposures, in the banks of these streams, although no high bluffs occur, the ledges of rock not usually exceeding ten or twenty feet in height. The region between the valleys of the streams is, mostly, gently rolling prairie, destitute of timber, which is almost exclusively confined to the edges of the streams. The soil is usually highly fertile The settlements are chiefly in the neighborhood of the streams, where timber, water power, and building materials are abundant, and where the flourishing condition of the towns, which have only been recently settled, attest the presence of an industrious population, possessed of unusual advantages of soil and position. The prosperity of the county has been somewhat retarded by the want of facilities to transport its surplus products to market. The extension of the McGregor Western Railroad, and the Cedar Valley Railroad, both of which are expected to pass through this county, will soon give the people a choice of markets at home.
The gently rolling surface of the county; its deep black soil; its pure water, from never failing streams and springs; its extensive quarries of limestone; its ample supply of timber, and its unsurpassed facilities for manufacturing, afforded by the Cedar River, are attracting the attention of eastern people seeking western homes. The land is well adapted for raising flax, sorghum and wool, as well as for the common cereals, fruits and root crops.
MITCHELL, the county seat, is situated on the east bank of the Red Cedar River, and includes East and West Mitchell. It is fifty miles from Waverly, the present terminus of the Cedar Valley Railroad. It has five or six hundred inhabitants, and is surrounded by farming lands, unsurpassed for richness and fertility, and contains a splendid stone Court House, a large three story flouring mill and saw mill, run by water, a steam saw mill, two fine school houses, six stores, two hotels, a cabinet manufactory, two harness makers, two wagon shops, two cooper shops, one tin shop, three shoemaker shops, four doctors, two lawyers and three ministers, to wit: Methodist, Congregational and Baptist. The Mitchell Press is published weekly by T. M. Atherton. The village possesses every natural advantage for manufactories, of almost every description, as the Cedar at this place affords one of the best water-powers in the State.
OSAGE is in the southern central portion of the county, and has four general stores, one drug store, one book store, one grocery, one boot and shoe store, one bank, one flour mill and two saw mills.
SAINT ANSGAR is on the Cedar River, on the stage route from Waverly to St. Paul, Minnesota. It contains three churches, Baptist, Methodist and Congregational; also two general stores, one flour mill, and one saw mill. There is an abundance of timber in the township. Population, 500; township, 800.
STACYVILLE is in a township of the same name, on the Little Cedar River. It contains two churches, Congregational and Methodist; one flour mill and three general stores. Population, 200.
OTRANTO is in the northwestern corner of the county, twenty miles from Osage. It has a Methodist church, one general store, one flour mill and one saw mill. Population, 200; of township, 500.
NEWBURG is on the Cedar River, on the stage route from Cedar Falls to St. Paul, six miles from Mitchell. Cedar River furnishes, at this point, a fine water-power. Population, 50; of the township, 150.
RICEVILLE is situated in the eastern part of the county, on the Wapsipinicon River, and contains two churches, Baptist and Methodist, one flour and saw mill, and two general stores. Population, 80.
BROWNVILLE is a small post village, in Burr Oak township, on Little Cedar River, nine and a half miles northeast of Mitchell. It has one flour and saw mill and one general store. The soil of the township is a black loam. The surrounding country is not heavily timbered, yet enough for present use.
WENTWORTH is on the Wapsipinicon River, in the northeast portion of the county, seventeen miles from Mitchell. It contains one Baptist church. Population of township, 200.
DORAN is situated ten miles east of Mitchell, between the Wapsipinicon and Little Cedar Rivers. Population of township, 312. The remaining post offices are Cardiff, Mona and Nelson.  (Hair's Iowa State Gazetteer..., 1865)