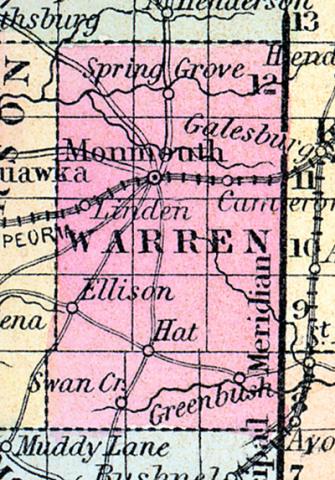 MONMOUTH, p-v., capital of Warren co. Ill, 120 N. w. Springfield, 850 W. Situated in a prairie, a little s. of Henderson r., and contains a court house, 6 stores and groceries, and about 20 dwellings.  (Haskell's Complete Descriptive and Statistical Gazetteer of the the United States...,1840)

MONMOUTH   A post village, capital of Warren county, on the line of the Chicago and Burlington railroad, 184 miles south-west from Chicago. It is situated in a rich and beautiful prairie, under good cultivation, and is a place of considerable business. It became the county seat in 1831. A newspaper called the Monmouth Atlas is published here. Population, about 900. Thos. H. Davidson, Postmaster.   (Hawes' Illinois State Gazetteer...,1859)