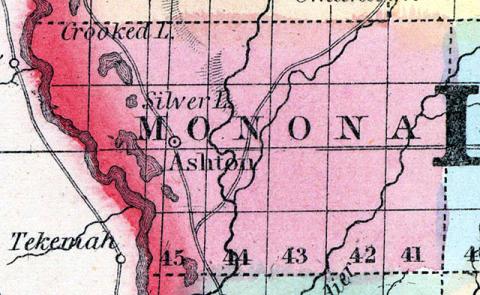 MONONA COUNTY   Is situated in the western portion of the State, on the Missouri River, and the fifth county north of the State of Missouri. It is bounded on the north by Woodbury and Ida Counties, on the east by Crawford County, and on the south by Harrison County.
The eastern part of the county is hilly, except the valleys of the streams running through it; the western is part level. About one acre in fifty of the eastern part is timber. In the western about one acre in eight is timber, composed principally of cottonwood, burr oak, black walnut, linn, mulberry, elm and maple, are found in considerable quantities. The soil is good. Corn is the principal crop, but wheat and oats grow well. Apples, plums and cherries, so far as tried, do well, and many varieties of small fruits grow wild in great abundance.
The county is watered by the Little Sioux River, entering the county near the centre of its northern boundary, and flowing through it in a southerly direction; by the Soldier Creek entering near the northeast corner of the county, and flowing through it in a southwesterly direction, and by the numerous branches of both.
There is plenty of good brick clay in the county, but coal has not as yet been discovered. For stock raising the county is unsurpassed, and the supply of pasture and prairie hay upon the bottom lands is inexhaustible. The rushes growing in the timbered lands upon the Missouri bottoms, afford food for large herds of cattle from December until March, and take the place of hay for that time. There is one water mill upon the Maple River, and one upon the Little Sioux. There are some other water-powers in the county not improved, on the Boyer, Maple and West Fork of Sioux. The townships are Ashton, Belvidere, Boyer, Franklin, Kennebec, Maple, Spring Valley and West Fork. The first settlers of the county were Isaac Ashton, in 1851, Josiah Sumner and Aaron Cook, in 1852, John B. Gard, Charles B. Thompson, and others, December, 1853. The county was organized December, 1853.
ONAWA is an incorporated town on the bottom lands of the Missouri River, three miles from the river, forty-five miles south of Sioux City, and sixty-five miles north of Council Bluffs. It was laid out in 1857 by the Monona Land Company. Among the first settlers were C. E. Whiting, J. E. Morrison, C. H. Holbrook, R. G. Fairchild, Charles Atkins, Wm. Burton and B. D. Holbrook. The surrounding country is well adapted to grain of all kinds, and probably the best stock-raising country in Iowa. The bottom lands are about fifteen miles wide, having from two to three miles of timber land next the river, and the remainder furnishing inexhaustible pasturage. Most of the Christian churches are represented among the inhabitants, but only the Methodists have a church organization. There is a good school maintained throughout the year. The West Iowa Gazette is a weekly newspaper published on Saturdays, by Daniel W. Butts. Population, 200.
BELVIDERE is situated in the central portion of the county, sixty miles north of Council Bluffs, and on the stage route from the terminus of the Cedar Rapids & Missouri River Railroad to Decatur, Nebraska. It contains a Methodist Church, one general store and two flour and saw mills. The surface of the surrounding country is generally rough, but the soil is good, especially on the river bottoms. Oil, flax, wool and brick manufacturers are much needed. Population of township, 200.
MAPLETON is in the northern part of the county, on Maple River. It has one general store and one flour mill. Population, 28; of township, 261.
SAINT CLAIR is on the surveyed route of the Cedar Rapids & Missouri River Railroad, one hundred and five miles west of Boonsboro, and twenty-two miles east of the county seat.
The other post offices in the county are Arcola, Boyer City, Kennebec, West Fork and Preparation.   (Hair's Iowa State Gazetteer..., 1865)