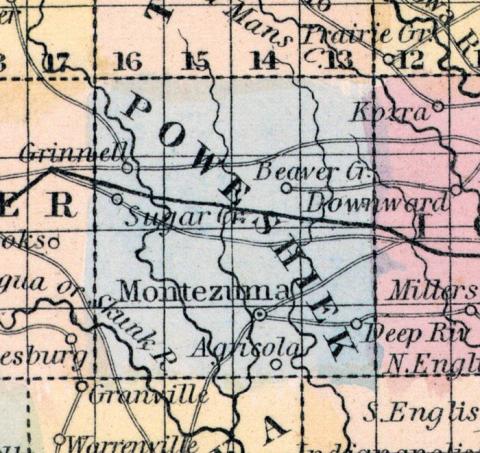 MONTEZUMA, a small post-village, capital of Poweshiek co., Iowa, about 60 miles W. by S. from Iowa City.   (Baldwin's New and Complete Gazetteer of the United States..., 1854)

MONTEZUMA, the seat of justice of Poweshiek County, was laid out in the summer of 1848, by John White, R. B. Ogden and a Mr. Matthews, five years after the first settlement in the county.
Gideon Willson and Isaac G. Willson hauled the first timber on to the town site, in January, 1849, and erected the first building in the town, a log house, which is still standing as a part of the building known at present as the McGee property. Martin Snyder had previously built a log house a little west of town. Gideon Willson, who is at present a dry goods merchant in the place, kept the first store in the town and in the county, which was opened in June, 1850.
The first white child born in Montezuma was Catharine Willson, daughter to Isaac G. Willson, in March, 1850. The first death in the place was that of the wife of Washington B. Harden, which occurred in the fall of 1849.
The population of Montezuma was at one time about a thousand, but many dwelling houses have been removed from the town to farms in the vicinity, and the population thus decreased for a time. The country around is thickly settled and well improved.
Montezuma contains five dry goods stores, six groceries, two drug stores, three blacksmith shops, a wagon shop, two cabinet shops, one harness and saddle shop, one banking house, one large brick steam flouring mill, one printing office, two churches, one large hotel, one large school house and a substantial and elegant court house.
There are three church organizations in the place, the Methodist Episcopal, the Methodist Protestant and the Presbyterian. The Methodist Protestant Society has a small but good brick building; the Methodist Episcopal Society has a fine frame building about forty by sixty feet, erected in 1838, at a cost of about $4,400. At present the Presbyterians worship in the court house.
The school house is two stories high, and contains four commodious rooms; it will accommodate about 250 scholars. The court house is a magnificent structure of brick, of the Doric style of architecture; the foundation, caps and sills are of white limestone. The size of the building is fifty by seventy feet, two stories high. (Hair's Iowa State Gazetteer..., 1865)