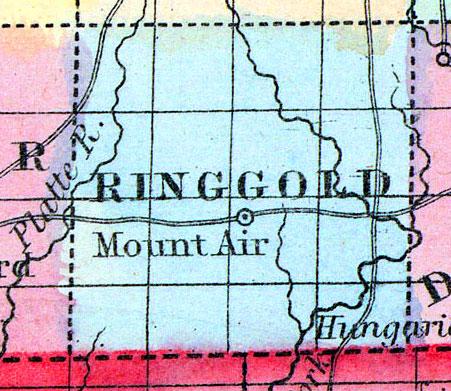 MOUNT AYR, the county seat of Ringgold County, is an unincorporated village, pleasantly situated on an elevation commanding an extensive view of the surrounding country, being three quarters of a mile south of the geographical centre of the county, and seventy-five miles northeast of St. Joseph, Missouri, the same distance east of Nebraska City, sixty miles north of Cameron, on the Hannibal and St. Joseph Railroad, and eighty-five miles southwest of Des Moines.
The first settlement was made in 1855, by David Edwards, Oran Gore, Chester Standeliff, B. B. Dunning and A. G. Beall. In the spring of 1856, Jas. C. Hagans, the Judge of the county, A. W. Tice, Clerk, J. W. Cofer, Treasurer, Henry Crabbs, a merchant, and Dr. E. Keith, settled in the place. During the summer of 1856 Mr. Crabbs' little son John, in company with other boys in the village were at play around a board kiln, when it accidentally fell upon him crushing him so badly as to cause his death in a few hours after, it being the first death in the village.
There are four or five religious societies represented in the village, but neither party as yet have erected a house of worship, the court-room being used for holding all religious, political, temperance, agricultural and other meetings for the present. In 1860 the Mount Ayr Republican, under the management of P. O. James, as editor, was started, and continued to be published until July, 1861, when Mr. James felt it his duty, with many other of the patriotic citizens of the village and county, to enlist to battle against the enemies of his country, and joining the 4th Iowa Infantry, served his full term, and came out safely, being honorably discharged after sharing the trials and triumphs of that noble Regiment during its three years of hard service from 1861 to 1864. Since the “change of base” by Mr. James, the village and county have been without a chronicler in the shape of a newspaper publisher. The village now contains a population of about 400 persons, has six general stores, one drug store, one grocery and provision store, two hotels, one tin and sheet-iron, two blacksmith, two wagon, one harness, two boot and shoe, one broom, one cabinet and joiner, and one chair-maker shop. (Hair's Iowa State Gazetteer..., 1865)