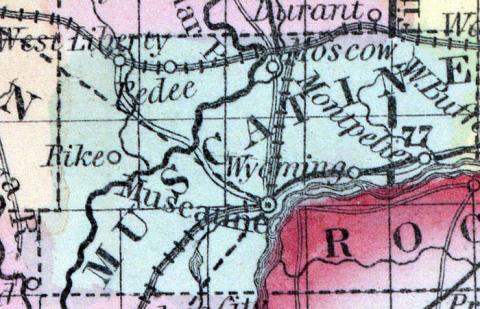 MUSCATINE, a county in the E. S. E. part of Iowa, bordering on Illinois, has an area of 450 square miles. The Mississippi river, which makes a great bend opposite the county, forms its south-eastern boundary for a distance of about 40 miles, and it is intersected by Red Cedar river. The surface is generally rolling, and diversified with groves of trees and extensive prairies; the soil is exceedingly fertile, and much improved. Wheat, Indian corn, and grass are the staples. In 1850 this county produced 841,466 bushels of Indian corn; 68,246 of wheat, and 5433 tons of hay. It contained 9 churches, 2 newspaper offices, and 1590 pupils attending public schools. Extensive beds of stone coal and quarries of freestone and limestone are found. A railroad is projected through this county from Rock island to the Missouri river. Capital, Muscatine. Population, 5731.  (Baldwin's New and Complete Gazetteer of the United States..., 1854)

MUSCATINE COUNTY     Is situated next below Scott County, on the Mississippi River, and contains an area of 432 square miles. The name of this county was derived from a tribe of Indians known as the Muscoutins. The county-town was originally called Bloomington, which name it still holds on a few old-fogy maps and tables of distances. In 1845 the name was changed to that of the county — Muscatine. In 1853 it was incorporated as a city, since which time it has been called the " City of Muscatine." The present population of Muscatine City is about 4600 ; of the county, including the city, 12,100.
The city contains nine churches, with a total number of nearly one thousand members ; two steam flouring-mills, two steam saw-mills, one stave and three shingle machines (all driven by steam) ; seven hotels, two public school-houses, (one erected in 1850, at a cost of $4000 ; the other more recently, costing $5000). Upwards of 300 children are in daily attendance at these schools.
Situated on a bend or arm of the river. Muscatine is favorably located to command the trade of a large section of country.....
The city of Muscatine is located upon uncommonly broken ground, and a majority of the lots, either for business or residences, require grading ; the citizens, however, are of that class, who, appreciating the superiority of their location in other respects, have by art made smooth Nature's rough places, and tasteful and stately residences now grace bluflfs, which but a few months ago, were almost inaccessible.
Two newspapers are published in Muscatine : a Whig, weekly and tri-weekly ; and a Democratic weekly.
The inhabitants have the character of being second to none in the State in point of intelligence and industry.  (Iowa As It Is in 1855; A Gazetteer for Citizens..., 1855)