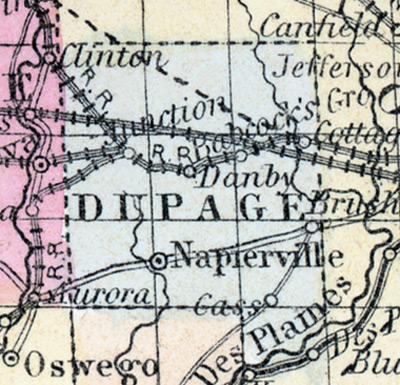 NAPERVILLE   A thriving post village, capital of Du Page county, on Du Page river, about 30 miles west-south-west from Chicago, 16 miles from the Illinois and Michigan canal. It contains a court house and a number of churches, a bank, and does a large amount of manufacturing, having excellent water power for the purpose. The Galena and Chicago Union Railroad runs within eight miles of the village, on the north, and the Aurora Branch within ten miles on the west. There are here six dry goods stores, a hardware store, a drug store and two grocery stores, and the amount of merchandise sold by them during the past year amounted to over $200,000. During two months in the fall of 1857, one firm alone bought about 53,000 pounds of wool, costing over $23,000. Population, 2,500. Robert Naper, Postmaster.  (Hawes' Illinois State Gazetteer...,1859)