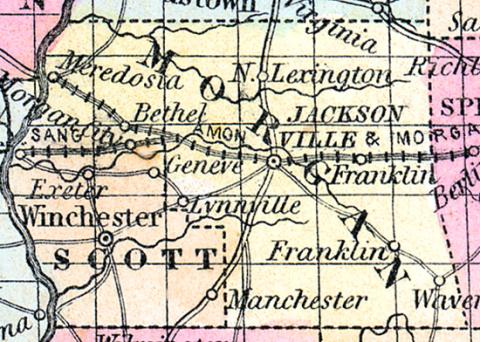 NAPLES, a thriving post-village of Scott co., Illinois, on the left bank of the Illinois river, 55 miles W. from Springfield. It is the western terminus of the Sangamon and Morgan railroad, which connects it with Springfield. Large quantities of grain, pork, &c. are received here, and shipped by steamboats. The trade of Naples in 1852 was estimated at $4,000,000 in the late message of Governor Matteson. A newspaper is published here.   (Baldwin's New and Complete Gazetteer of the United States..., 1854)

NAPLES    This town is situated on the east side of the Illinois river, in Scott county, and is the the terminus of the G. W. R. R. The Hannibal and St. Joseph Railroad will be completed during next summer to this place, as also the Camp Point and Quincy, connecting by bridge across the Illinois river with the G. W. R, R.  Distance from St. Louis, 110 miles; from Chicago, 270; Springfield, the capital, 54 by railroad. A daily packet line to the former place. G. A. Lyndsay, Postmaster.   (Hawes' Illinois State Gazetteer..., 1859)