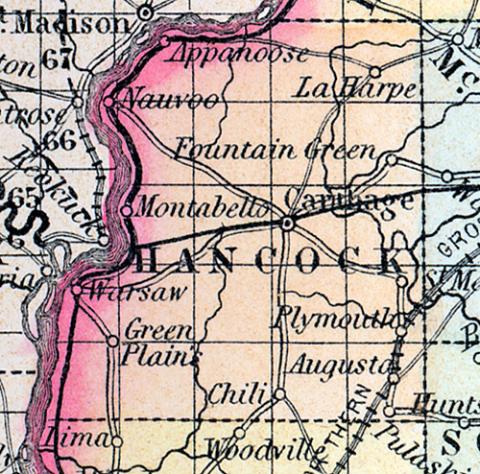 NAUVOO CITY of Hancock co., Illinois, on the Mississippi river, near the head of the lower rapids, 52 miles above Quincy, and 220 miles above St. Louis. It was founded .by the Mormons in 1840, and once contained from 15,000 to 18,000 inhabitants. The situation is one of the most beautiful on the river. The ground rises gradually from the water's edge to an unusual height, presenting a smooth and regular surface, with a broad plain at the summit. Nauvoo was laid out on an extensive plan, with broad rectangular streets. The dwellings were mostly log cabins, or small frame houses. The Mormon Temple, built of compact polished limestone, was 130 feet long by 88 feet wide, and was one of the most costly edifices in the West. In the basement there was a baptistry, a large stone basin, supported by 12 colossal oxen. In October, 1848, this temple was fired by an incendiary, and reduced to ruins. About that time the Mormon population were expelled from the state by force of arms, and emigrated to Utah, leaving the greater part of their houses unoccupied. A company of French socialists, under M. Cabet, have recently established themselves here, having purchased the site of the temple and other property. Their number is stated to be about 400. Nauvoo has a good steamboat landing. Population in 1853, estimated at 2000.   (Baldwin's New and Complete Gazetteer of the United States..., 1854)

NAUVOO   Is situated in Hancock county, on the Mississippi river, near the head of the lower rapids, 220 miles from St. Louis. It was founded by the Mormons in 1840, and at one time contained about 18,000 inhabitants. The situation is one of the most beautiful on the river, the ground rising gradually from the water to a great height and terminating in a broad plain overlooking the surrounding country for miles.
The plain upon which the city was laid out was very extensive, the streets being broad and crossing one another at right angles. The houses were mostly built of logs, a few frame ones being occasionally met with. Such instances were, however, rare. The great object of curiosity and interest was the great Mormon temple, a gigantic building when compared with those around it, being 130 feet long by 90 wide. It was built of polished lime stone, and was at that time one of the most costly edifices of the west. The baptistry was situated in the basement, and contained a large stone basin, supported by twelve collossal(sic) oxen, supposed to have been typhical (sic) of the twelve tribes of Judah. In this vast temple, dedicated to falsehood and supported by error and superstition, was performed those rites and ceremonies which have ever characterized the Mormon church, and which have made it a stepping stone to vice and immorality of the grossest character. About the year 1848 the usurpations of the Mormons had become so flagrant, and their influence so demoralizing, that a war of extermination was commenced, and by force of arms they were compelled to leave the city and state. They accordingly crossed the river and located in in the territory now called Utah, formerly a part of the Mexican province of California Alta. After the restoration of peace, they formed a temporary state government under the style of the state of Deseret.  About the time of the evacuation of the city by the Mormons, the temple was destroyed by fire and reduced to ashes. Subsequently a company of French Socialists, under M. Cabet, purchased the site of the temple and other property, and established themselves under a form of government little better than that which characterized their predecessors. The number of these Socialists amounted at one time to about 600.
Nauvoo has an excellent steamboat landing, and notwithstanding the short length of time which hag elapsed since its recovery from the Mormons, has a population of about 8,000.   John Bauer, Postmaster.   (Hawes' Illinois State Gazetteer..., 1859)