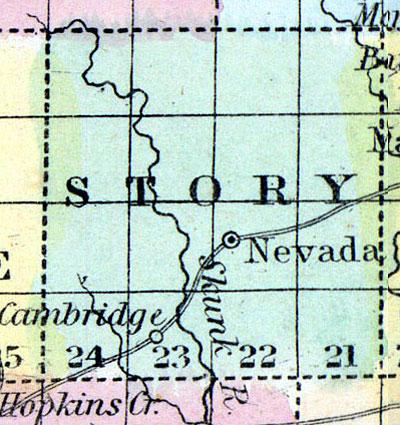 NEVADA, the county seat of Story County, is an unincorporated town with a present population of nearly one thousand persons. It is located on the Chicago and Northwestern Railway, three hundred and eighteen miles from Chicago. It is pleasantly situated upon a gently rolling prairie near the head of the grove which borders West Indian Creek. It was first settled by Theodore E. Alderman, who took up his abode within the town limits on the 14th day of October, 1853. He was alone in his glory until the following August, when he was reinforced by John H. McClain. In October, 1854, George Childs, T. J. Adamson, Jonathan Harris, A. P. Fitch, and Isaac Romane, became citizens. During the same autumn, and the succeeding year, an accession of more than two hundred persons was received, and the settlement became a village in fact as well as in name. During 1855 and '56 the population increased to about four hundred, and many meat and substantial dwellings were erected. The revulsion of 1857 put a stop to improvement, and the place advanced but little for several years. The building of the railroad, which was opened in the summer of 1864, gave the town a new impetus, and it is now improving rapidly.
The first child born in the village, was a daughter to Mr. Alderman, and was named Mary Nevada. The date of birth was January 13th, 1854. She died during the following December, that being the first death in the county. The oldest native of the town, now living, is Miss Ida C., daughter of Theodore E. and Hannah Alderman, born August 8th, 1857.
There are Methodist, Presbyterian, Episcopal, Cumberland Presbyterian, and Baptist church societies, comprised in the population of the town and vicinity. The village school is graded, and at present affords facilities for acquiring the common branches. Additional school-rooms will soon be built, and the facilities increased and extended.
There is a Lodge of A. F. & A.M., which meets in Nevada Hall on the Saturday evening of or next preceding each full moon; also a Temperance organization, with stated weekly meetings. The AEgis is published every Wednesday by John M. Brainard and Adam Keltz.
The usual number of dry goods stores, groceries, drug stores, hardware stores, physicians, lawyers, mechanics and laborers, is to be found. The community is industrious and moral, and town and country around are both advancing as rapidly as is consistent with the best interests of either.   (Hair's Iowa State Gazetteer..., 1865)