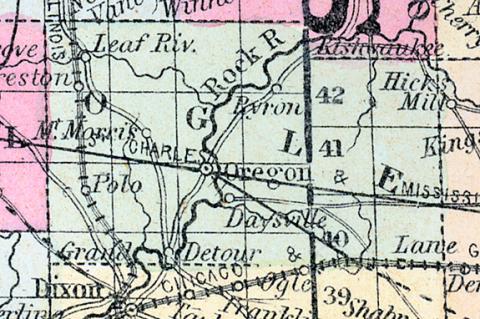 OGLE COUNTY  Is situated in the north part of the state, and has an area of 760 square miles. It is intersected by Rock river, dividing it into nearly equal parts, and is also drained by Leaf river, and Elkhorn and Pine creeks. The surface is undulating, and the soil very fertile. The county contains extensive rolling prairies, with a moderate proportion of timber. Corn, wheat, oats and hay, are the staples. It contains a number of churches, several newspaper offices, and has over 3,000 pupils attending public schools.
It is intersected by the Galena and Chicago Union railroad.
Ogle county was organized in 1837, and included within its limits the territory of the present Lee county, which was set off in 1839. The oldest settled town is Buffalo Grove; the first mill was erected and the first school opened in 1835. Up to this time the settlers had stamped their corn in a wooden mortar, but as the number of mouths increased, the demand for "cracked corn" increased proportionately, and the old mortar became too tedious a way of procuring food. Accordingly, a Mr. Wilson commenced to put up a grist mill, which event was hailed with so much joy by the settlers, that the men turned out with teams and tools, and assisted gratuitously in its erection.
In the year following, 1855, constant accessions were being made to the number of inhabitants of the county, new towns were being formed and new improvements carried out, until it has become one of the first counties in our state.
One remarkable feature will be noticed by persons who may read the whole history of this county—their anxiety and interest in the establishment of schools. The seminary at Mt. Morris, which is now in successful operation, was opened in 1840, in a small log building, possessing few of the conveniences now so easily attained.
The first record of a county court dates January 3, 1837, when the commissioner's court was holden at Oregon. The second meeting was held at Buffalo Grove, in March following, when the county was districted. The first circuit court was holden at Dixon, in October, 1837, under Judge Stone, who acted until the district was divided, when Hon. Thomas Ford, afterwards governor, was appointed in this (the 9th) district.
In 1840, the first court house was begun, and completed the following year. It was a fine two story building, about the same size as the present one, and cost upwards of 818,000. This building was never used, it having been set fire to on the night previous to the sitting of the court.
At this time, Ogle and the counties surrounding were infested with regularly organized gangs of blacklegs, horse theives (sic) and counterfeiters. Their numbers were so numerous and the bands so well organized that it was impossible to convict them.
At the time of the burning of the court house, there were a number of these desperadoes confined in the jail, awaiting trial. Their accomplices accordingly set fire to the court house, in the hope that in the hurry and confusion incident to their removal to a place of safety, they might make their escape. The excitement produced was very great, and at the next term of court three of these men were tried, convicted, and sentenced to the penitentiary; not, however, without much difficulty, as one of their number had managed to get upon the jury, and refused to agree upon a verdict until the remaining eleven threatened to lynch him in the jury room. The other prisoners obtained change of venue, and afterward succeeded in breaking from the jail where they were confined. The people became so exasperated and determined, that "regulating companies" were formed, who inflicted summary punishment upon the lawless ruffians who had so long been a pest to the country. Some of them they banished from the country, and among these was a family named Driscoll, consisting of the old man and several sons, nearly all of whom were escaped convicts from the Ohio penitentiary. This family determined not to be driven off, and, with their confederates, planned an attack upon the principal men in the ranks of the regulators, which so far succeeded that a Mr. Campbell was shot dead by one of the Driscoll's, while returning home from church.
The same night a messenger reached Oregon with the news, a company was raised, and pursuit of the assassins commenced, and before night of the next day they had succeeded in securing the old man Driscoll, while endeavoring to make his escape. He was immediately taken to Oregon, and put in charge of the sheriff.
In the mean time, news of the murder had spread far and near, the people turned out en masse, and the next day they succeeded in capturing two of the old man's sons. It was the intention of the people to have left the elder Driscoll in the hands of the sheriff, but immediately upon learning of the arrest of the sons, he was taken by the enraged people and carried to Washington Grove, where it was decided he, together with the two sons, should be hung. The old man and one son was convicted, and the other son was acquitted.
After the examination was concluded, one hour was allotted to the prisoners, at the expiration of which time they were placed, one at a time, in a kneeling position, their eyes bandaged, and then fired upon by the whole company.
This action effectually put a stop to further depredations. The regulators were afterward tried for murder, and acquitted. These were only a few of the difficulties which had to be surmounted by the early settlers of the north-west.
Ogle county now takes rank as one of the greatest agricultural counties of the state, and in point of productiveness, healthiness, and location, is perhaps unsurpassed in the west. Capital, Oregon City. Population, 17,800.  Judge of County Court, Vergil A. Bogue. Sheriff, Eliphalet R. Tyler.  (Hawes' Illinois State Gazetteer...,1859)