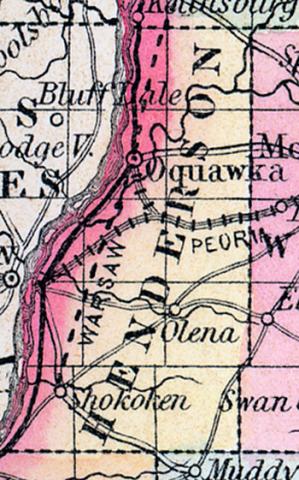 OQUAWKA, p-v., capital of Henderson co. Ill. , 138 N. w. Springfield, 868 W. Situated on the E. bank of the Mississippi r., and contains a few stores and dwellings.  (Haskell's Complete Descriptive and Statistical Gazetteer of the the United States...,1840)

OQUAKA(sic), a flourishing post-village, capital of Henderson county, Illinois, on the E. bank of the Mississippi river, 132 miles N. W. from Springfield. A railroad has been commenced from Peoria to this place. Oquaka has an active business in shipping produce: 3 newspapers are issued here. Population in 1853, about 1000.  (Baldwin's New and Complete Gazetteer of the United States..., 1854)

OQUAWKA   A flourishing post village, capital of Henderson county, on the east bank of the Mississippi river, 132 miles north-west from Springfield. It is the terminus of the Peoria and Oquawka Railroad, The place is one of great activity, being a prominent shipping point for produce and grain. Has one or two newspaper offices. Population, about 2,500.  James Caswell, Postmaster.  (Hawes' Illinois State Gazetteer...,1859)