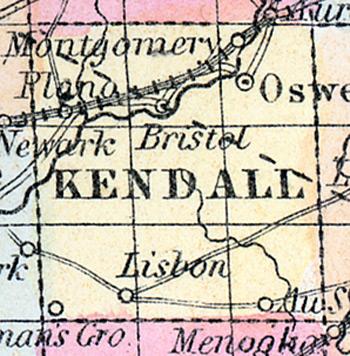 OSWEGO, a handsome and flourishing post-village of Oswego township, capital of Kendall county, Illinois, is finely situated on the left bank of the Fox river, 45 miles W.S.W. from Chicago.  Fox river is a beautiful and rapid stream, affording almost unlimited hydraulic power.  Two plank-roads have been commenced, which will connect Oswego with Chicago and Joliet;  and the Chicago and Aurora railroad passes near this village.  Oswego contains a handsome stone court house, 2 or 3 churches, a large stone edifice for schools, 8 or 10 stores, a mechanics' hall, and several mills.  Pop. in 1853, about 1000.   (Baldwin's New and Complete Gazetteer of the United States..., 1854)

OSWEGO   Is an incorporated town, capital of Kendall county, on the Fox river, 1-1/2 miles from the line of the Burlington and Quincy Railroad, and 6 miles south from Aurora. It has the best water power in this part of the state, which is well improved. Manufacturing is carried on to considerable extent, there being here a large cooperage and wagon factory, foundry and machine shop. There are also several lime kilns and extensive brick yards, from which are furnished superior qualities of these building materials. Two good hotels are to be found, the National Hotel and the Kendall House; also, five churches and a large seminary. A weekly newspaper is published here, called the Kendall County Free Press, by H. S. Humphrey. The advantages of Oswego are such as to secure to her an importance in trade and manufactures equal to other and older towns. John W. Campton, Postmaster.  (Hawes' Illinois State Gazetteer...,1859)