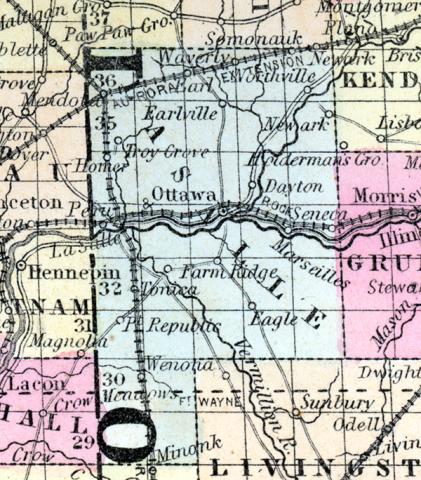 OTTAWA   A flourishing town, capital of La Salle county, is situated on both sides of the Illinois river, just below the mouth of Fox river, and on the line of the Chicago and Rock Island railroad, 88 miles west-south-west from Chicago. Improvements are being made in the rapids of the Illinois river, a few miles below the town, which will render it navigable for steamboats at all stages of water. The Fox river at this point has a fall of 29 feet, producing a water power which is said to surpass any in the state. Ottawa contains several churches, 1 bank, 2 newspaper offices and a number of large flouring mills and factories. Rich beds of coal are found in the vicinity. The supreme court for the north division of the state is holden here.   Wm. Osman, Postmaster.  (Hawes' Illinois State Gazetteer...,1859)