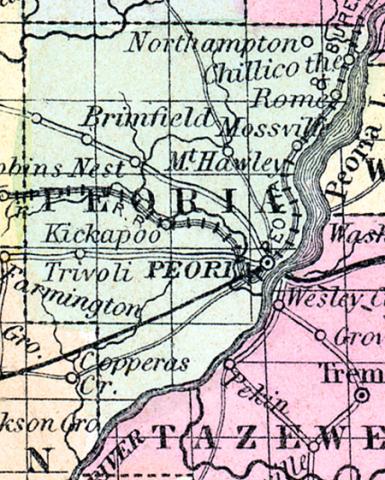 PEORIA, a handsome and flourishing city, capital of Peoria county, Illinois, on the right or W. bank of Illinois river, at the outlet of Peoria lake, 70 miles N. from Springfield, and 151 S. W. from Chicago. It is the most populous town on the river, and one of the most important and commercial in the state. The river is navigable by steamboats in all stages of water, and is the channel of an immense trade in grain, lumber, pork, &c. A number of steamboats make regular passages between St. Louis and Peoria, which also communicates with Chicago, by means of the Illinois and Michigan canal. The Peoria and Oquawk railroad connects this place with Burlington, Iowa, and will be extended eastwardly to Middleport. The town is regularly laid out, and well built. It has, besides the county buildings, about 10 churches, several seminaries, a telegraph office, a bank, and 6 newspaper offices. We quote the following description from the letter of a recent traveller:—"Peoria is the most beautiful town on the river. Situated on rising ground, a broad plateau extending back from the bluff, it has escaped the almost universal inundation. Indeed the river here expands into a broad, deep lake, that embosoms the rising flood. This lake is a most beautiful feature in the natural scenery of the town, and as useful as beautiful, supplying the inhabitants with ample stores of fish, and in winter with abundance of the purest ice. It is often frozen to such a thickness that heavy teams can pass securely over it. A substantial drawbridge connects the town with the opposite shore of the river. The city is laid out in rectangular blocks, the streets being wide and well graded. The schools and churches are prosperous, and the society good. A public square has been reserved near the centre. Back of the town extends one of the finest rolling prairies in the state, which already furnishes to Peoria its supplies and much of its business." The number of steamboat arrivals in I850 was 1286. La Salle, the Frenchman, established a post at this place in 1680. The rise of the present town dates from April, 1819. It was incorporated as a city in 1844. Population on January 1, 1851, 6212, in 1853 about 8000.  (Baldwin's New and Complete Gazetteer of the United States..., 1854)

PEORIA,  A handsome and flourishing city, capital of Peoria county, on the west bank of the Illinois river at the outlet of Peoria lake, 10 miles north from Springfield, and 151 southwest from Chicago. It is the most populous town on the river and one of the most important and commercial inland cities of the state. Peoria has not hitherto held its true position in the list of chief cities of the Prairie State, either in point of popularity or as a manufacturing and commercial town. But a better day has dawned upon the city. The Peoria & Bureau Valley railroad furnishes a connection with the Chicago and Rock Island road, and, through that, with all places east, north and south, that can be reached by railroad. This has been finished for more than a year and is doing a large amount of business. The Peoria and Oquawka railroad is designed to connect the Illinois river at Peoria with the Mississippi at Burlington and Oquawka. It passes through one of the most fertile and best cultivated portions of the state. Notwithstanding Peoria has been generally overlooked and its advantages been unappreciated, it has gradually been going forward, and growing into numerical and commercial importance. Within the last five years its population has doubled. It is impossible, with our present limits, to give any idea of the rapid improvements that Peoria is making as regards the erection of buildings. They are springing up on every side, and, within the past year, many of the first class have been erected. The last census report gives $2,221,470 as the value of the manufactures of the city for the past year, and the sales of the article of lumber alone, amounted to near a quarter of a million of dollars.  Peter Sweat, Postmaster.  (Hawes' Illinois State Gazetteer..., 1859)