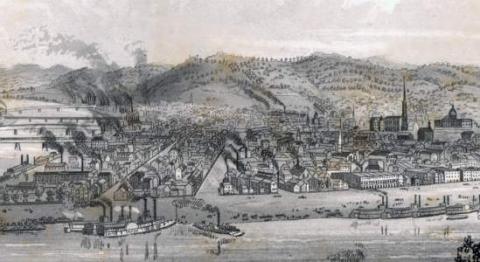 PITTSBURGH, city, Alleghany со., Pa., is situated at the head of Ohio river, which is here formed by the confluence of the Alleghany and Monongahela rivers. It is 297 miles westerly from Philadelphia, and 326 miles from Washington.

The city is built on a broad level point of land, between the two rivers, and is enclosed by hills, which are filled with bituminous coal. This constitutes the fuel for the vast number of factories, the tall chimneys of which bristle the town, belching black clouds of smoke, that darken the air and stain the houses a dusky hue. In point of beauty, therefore, Pittsburgh has little that is attractive ; yet there is something interesting in the concentration of industry and enterprise which this dark city exhibits….The flourishing towns and villages which surround the city, afford pleasant sites for residence. Of these places, which are virtual suburbs of Pittsburgh, Alleghany city, on the opposite bank of the Alleghany, is the most important. The river is here spanned by n fine bridge 1,122 feet long, resting upon five stone piers; two bridges cross it at other points, and the Pennsylvania canal has a splendid aqueduct, 1,200 feet long, over the same stream. On the Monongahela are Birmingham and other settlements, which are connected by a bridge 1,500 feet long, and several ferries.

From its position, Pittsburgh is a great commercial as well as manufacturing emporium. It holds to Pennsylvanian the same relation as Buffalo does to New York, being the gate of commerce between the east and the west. Hither come a large number of steamboats, during the season of navigation, from New Orleans and the valley of the Mississippi and Ohio rivers. The Pennsylvania canal, after traversing the whole state, and crossing the Alleghany on its great aqueduct, passes by a great tunnel under a hill near the city, and enters the Monongahela. Pittsburgh is connected with Lake Erie by the, Ohio and Pennsylvania and the Cleveland and Pittsburgh railroads, and with Philadelphia by the Grand Trunk railroad.

The city contains an elegant courthouse, 165 feet long, 100 feet wide, and 148 feet from the ground to the top of the dome, which affords a delightful view of the populous neighborhood and rich picturesque surrounding region ; also a prison, the Western University of Pennsylvania, finely seated on an adjacent elevation, and numerous churches, banks, hotels, and other prominent buildings. The Allegheny river affords a plentiful supply of water, which is distributed over the city by expensive and convenient water-works ; and the bituminous coal of the adjoining hills yields gas for illuminating the town.

The manufactures embrace almost every article of domestic necessity and convenience. Machinery, cutlery, glass, cotton, cloth, pottery, paints, and drugs, are a few of the vast and innumerable variety produced.