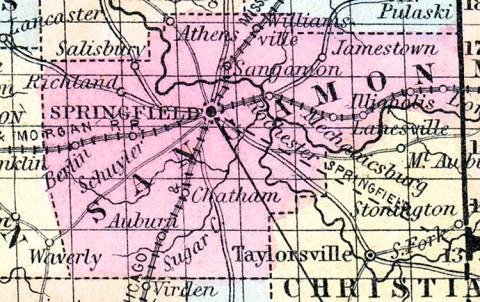 SPRINGFIELD, p-v., capital of Sangamon co, and of the State of Illinois, 103 N. by K. St. Louis, 780 from W. Situated near the centre of the state, 4 ms. S. Sangamon r., on the border of a beautiful and extended prairie. It wax laid out in 1822, and in 1823 contained 30 families, living in log cabins. Its principal growth has been within 10 years past. It contains a state house, for the erection of which $50,000 has been appropriated, a court house, and market house, on a fine public square, a jail, a U. S. land office, 6 churches—2 Presbyterian, 1 Episcopal, 1 Baptist, 1 Baptist Reformed, and 1 Methodist—3 academies, 34 stores, cap. $266,0110; 1 iron foundry, 4 carding machines, 3 printing offices, each issuing a weekly newspaper, and 2,579 inhabitants. It has been the capital of the state since 1840.   (Haskell's Complete Descriptive and Statistical Gazetteer of the the United States...,1843)

SPRINGFIELD, p. v., seat of justice of Sangamon co., and capital of the state of Illinois; from W. 780 ms. The town is situated four miles south of Sangamon river, and became the capital of the state in 1840. It is surrounded by a rich and populous region, picturesquely varied with prairies, forests, vales, and gentle elevations. The village is one of the most pleasant and beautiful in the west, situated on the border of extensive prairie, laid out with broad and shaded streets, interspersed with spacious lawns and squares, and indicating, in its neat and comfortable dwellings, prosperity and vigorous health... The population in 1840 was 2,579; in 1850, 4,533. (Fanning's, 1853)

SPRINGFIELD.  This city, the county seat of Sangamon county, and the capital of the state, is beautifully situated on an undulating prairie, skirted on two sides by forests. It is accessible from all directions, by the Chicago and St. Louis, and the Great Western and Toledo railroads, which cross each other at nearly right angles.
It is distant from Chicago 188 miles, and from St Louis 97 miles. The county of Sangamon was organized in 1820, and the first sale of lots in Springfield was made in 1828. In 1886, the seat of government was removed from Vandalia, and was permanently located at Springfield.
Its growth during the last few years has been very rapid, and of a permanent character. Springfield Is the point of shipment for the surplus agricultural productions of the county, and the centre of its trade, and is destined to be the great central city of the stuff. The streets and squares arc beautifully arranged, and compactly built up. The houses display much architectural skill, while the thrifty trees and shrubbery which skirt the streets and fill up the areas, make it a moat delightful place.
The public buildings arc fine, and the capital square is highly ornamented. The State House is much admired for its just proportions and symmetrical appearance. Springfield has many manufacturing establishments, mills, foundries, machine shops, churches of various denominations, four banking houses. four large hotels, two newspaper establishments—the Illinois Stale Journal, and the Illinois State Register. The Illinois Farmer is also issued from the Journal office. The society of Springfield is refined, and is a desirable place of residence.
Besides fire public free schools, it is the seat of the Illinois State University, a most flourishing institution.
During the past year, a system of sewerage was inaugurated, which, when fully completed, will effectually drain the city of surface water and all impurities, and the water works company are now engaged in the enterprise of boring, in order to secure a constant supply of pure water.
The most of the improvements made the last two years have been of a permanent and substantial character, such as would do credit to any city in the land; and a few years of growth like the two last, will give the "Flower City" a proud preeminence among the half dozen or more rivals now contending for the mastery in our state. Springfield was incorporated as a city in 1840, at which time the number of inhabitants was 2,579. In 1848, it was 3,912; in 1850, 5,106; in 1854, 6,218; in 1855, 7,250; since which no census has been taken. The valuation of real and personal property for the year 1857, was $4,461,907.
Among the many elegant residences that have been erected during the past year, none is more worthy of mention than that of ex-Gov. Matteson, on the corner of Fourth and Jackson streets. The extreme length of the building, exclusive of the portico, is 83 feet; and breadth, 68 feet; two stories in height, beside basement and attic. The foundations arc of heavy stone, and the superstructure of pressed brick, of beautiful appearance. The architect, J. M. Van Osdel, of Chicago, adopted the old Roman style of architecture, with pointed slate roof, laid in diamond shapes, and its angular shape and handsome proportions render it an object of interest to all. The new church built by the Universalist society, is situated just south of the governor's mansion. This is a fine structure of brick, and cost about $8,000.
Altogether, this city may be considered as one of the finest in the state, possessing all the requisites of wealth and comfort, and it H citizens manifesting that energetic spirit which is so indispensible to the advancement of our western country.
The present population is estimated at about 12,000.  Isaac R. Diller, Postmaster.  (Hawes' Illinois State Gazetteer..., 1859)