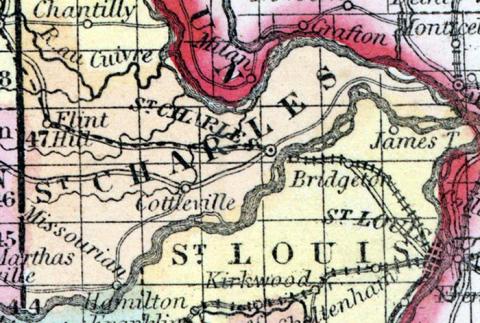 ST. CHARLES, a thriving post-town, capital of St. Charles county, Missouri, on the left bank of Missouri river, 22 miles from its mouth, 144 miles below Jefferson City, and about 6 miles by land S. from the Mississippi river. The situation is elevated and beautiful. The rocky bluffs in this vicinity present delightful views of the two great rivers above named. Quarries of limestone and sandstone and mines of stone coal have been opened near the town. It contains several churches, 1 newspaper office, and is the seat of St. Charles College, under the direction of the Methodists. Population - in 1853, estimated at 3000. (Baldwin & Thomas, A New and Complete Gazetteer of the United States ... 1854)

ST. CHARLES, The county seat of St. Charles county, is located on the eastern bank of the Missouri river, 18 miles from its mouth, 19¼ miles from St. Louis, and 110 miles from Jefferson City, and contains a population of about 3000.  The early settlement of St. Charles dates  back to the year 1764, when it was settled by the French and for a long time was regarded as the rival of St. Louis. Since the opening of the North Missouri Rail Road, the town has rapidly improved, and has in operation, three large steam flouring mills, two steam saw mills, and one woolen manufactory.  There are nine Churches; two Catholic, two Presbyterian, one Lutheran, the Methodist, and one Episcopal, one public school, two Colleges. viz: Lindenwood Female College, and St. Charles College; also, the Academy of the Sacred Heart, a Catholic Nunnery and School, all in a flourishing condition; also, a fine large Court House, cost $25,000.  It also contains a branch of the southern Bank of St. Louis, capital, $100,000.  A reading society and library, comprising 600 volumes, a Loan and Savings Institution, a Workman's Aid Society, and a Concert Hall Association.  The Odd Fellows have a Lodge here, viz: St. Charles, No. 126, and the Mason's Hiram Lodge, No. 118.  (The Missouri State Gazetteer and Business Directory, 1860)